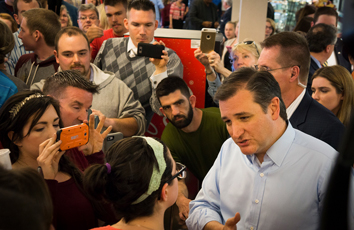 Texas Sen. Ted Cruz vowed to aggressively campaign across Indiana in the coming weeks, saying all eyes will be on the state ahead of the coming May 3 primary.

The Republican presidential candidate made the comment Thursday during a speech at the state GOP's annual spring dinner.

He said the people of Indiana want to get behind an optimistic conservative campaign.

Cruz told the audience that the eyes of the entire county "are on the state of Indiana."

Earlier in the day, Cruz attracted a crowd during the first visit of his campaign to Indiana.

During the visit at downtown's Shapiro's Delicatessen, Dave Frye of Indianapolis said he has hoped Cruz wins his party's nomination since he announced his candidacy more than a year ago. The 44-year-old insurance broker said GOP front-runner Trump has distorted the national conversation and that Cruz was a staunch constitutionalist.

Twenty-five-year-old Katie Conley of Indianapolis said she supports Cruz because of his focus on family and his anti-abortion stance.

Cruz's visit came nearly two weeks before Indiana voters cast their ballots in the state primaries. Indiana is expected to be pivotal in this year's presidential race despite being late in the election season.

A couple hundred people crowded into Shapiro's for Cruz's visit, with many supporters taking photos with the Texas senator before he ordered a sandwich.

“He had a pastrami on rye with spicy mustard,” said deli owner Brian Shapiro. “His staff wanted him to take it to go and I said, ‘You know what, let him go back and sit down.’”

Cruz weaved his way through the crowd, got his sandwich and moved to the back of the restaurant with a mob following him. The relentless tide of people cornered him at a table where he started his late lunch.

Cruz met privately later Thursday with Indiana Gov. Mike Pence before speaking at the state GOP fundraising dinner, where tickets cost $150 each and up.

Cruz referenced a quote from the Indiana basketball movie "Hoosiers," comparing the federal government to "the guy who will get naked and bark at the moon in your living room."

The candidate made a play for the local crowd, saying the 1986 movie about a small-town Indiana basketball team that won against improbable odds was a favorite.

Gene Hackman played coach Norman Dale in "Hoosiers." In a memorable line, he says there are "two kinds" of dumb: A man who runs in the snow, naked while barking at the moon, and a man who does the same thing in your living room.

Sen. Ted Cruz vowed to aggressively campaign across Indiana in the coming weeks, saying all eyes will be on the state ahead of the coming primary.