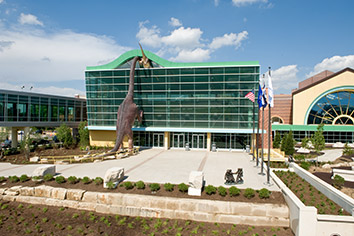 The Children’s Museum of Indianapolis is embarking on a $10 million-plus outdoor expansion on 10 acres it owns to the north of the museum building in hopes of drawing more visitors during the summer months.

Called the Sports Legend Experience, the attraction would include a 15,000-square-foot pavilion, an 18-hole miniature-golf course, pedal-car race tracks, a soccer field, and areas for street-hockey, tennis, basketball and other sports-related activities.

The museum provided the details in plans it submitted to the city as part of a request for a zoning variance. The Metropolitan Development Commission’s hearing examiner is set to consider the variance Thursday afternoon. (For an enlarged view of the site plan, click on image below.)

Construction likely wouldn’t begin until next year and be finished until 2018, said Brian Statz, the museum’s vice president of operations and general counsel.

Statz estimated the project's cost at $10 million but a museum spokeswoman later said the price tag would likely be much higher.

“We’ve been considering something like this for a while,” he said. “With a project of this size, it just takes some time to get it up and running.” 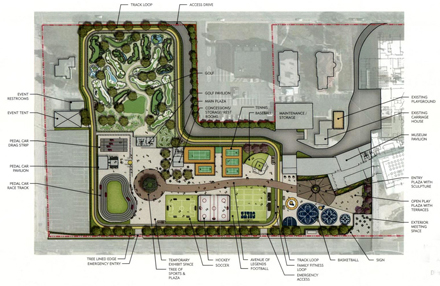 Plans for the outdoor attraction have been in the works since at least 2012, when the museum purchased both The Drake and The Whitestone apartment buildings to the north of the museum from Indianapolis-based Zender Family Limited Partnership for $1 million each.

Two years later, the museum began tearing down The Whitestone at 3140 N. Meridian St. to make way for “some sort of outdoor attraction or exhibit,” Statz told IBJ in August 2014.

The museum hopes to boost summer attendance by adding the outdoor activities, Statz said, in addition to bringing another amenity to the neighborhood. The museum typically attracts more than 1.2 million visitors annually, ranking it as one of the most-visited museums in North America.

With 472,900 square feet under roof and 120,000 artifacts, the museum is the largest children’s museum in the United States.

The outdoor attraction would be built on a surface lot bounded by Illinois Street on the west side and on the land where The Whitestone once stood along Meridian Street. The Drake continues to operate as apartments at 3060 N. Meridian St.

Although 332 museum parking spaces would be lost to the project, the parking garage west of Illinois Street and off-street parking areas are expected to adequately accommodate the expansion, the museum said in the filing. A smaller parking lot at the northwest corner of the museum property, at North Illinois and West 32nd streets, would remain.

Various sports-related attractions would be located along the western portion of the site, with the mini-golf course to the northeast, along North Meridian Street.

The entire area where the attraction would be built stretches from West 30th Street north to West 32nd Street and from Meridian Street west to Illinois Street.

An existing access drive to the Drake apartment building would be closed and a new access drive would be installed to the north of the Salvation Army building’s access drive, according to the plans.

Department of Metropolitan Development staff recommends approval of the request.

“The proposed rezoning and expansion of uses affiliated with the Children’s Museum would be appropriate and consistent with the existing use by offering outdoor experiences for the public, as well as families with children,” DMD staff wrote in its report.

Sports Legend Experience is just one of the new attractions the museum is working on. In June or early July, it plans to open "Beyond Spaceship Earth," an $8.1 million permanent exhibit focusing on space exploration.

Located in the museum’s basement, it will include walk-through recreations of sections of the International Space Station with an emphasis on STEM (science, technology, engineering and math) educational components. Digital games developed with the support of the Entertainment Software Association Foundation have been designed to recreate astronaut experiences.

“Beyond Spaceship Earth” will lead into the existing planetarium, which is being re-imagined and redesigned under the name Schaefer Planetarium and Space Object Theater.