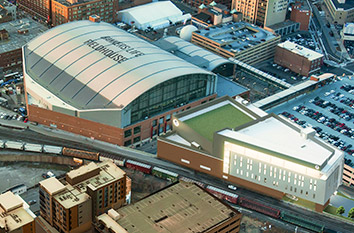 The state has agreed to pay $2 million toward the construction of a pedestrian walkway beneath Delaware Street connecting Bankers Life Fieldhouse to St. Vincent Center, the Indiana Pacers' new training facility.

The project includes construction of the tunnel and elevators to street level, according to an Indiana Economic Development Corp. filing recently posted on its website. The grant was approved April 26.

Many downtown projects—including hotels, office buildings Circle Centre mall and the Indiana Convention Center—are connected by skywalks. The convention center and Lucas Oil Stadium are connected via a short tunnel beneath South Street.

“[The Delaware connector] is underground instead of overhead because it will connect directly to the event level of Bankers Life Fieldhouse,” Pacers President Rick Fuson told IBJ. The Fieldhouse's event level is below street level.

The $50 million, five-story St. Vincent Center is under construction across Delaware Street from Bankers Life Fieldhouse and south of its parking garage. It is expected to house two NBA-regulation practice courts, as well as training and medical facilities. St. Vincent Health, which will offer services in the facility, has agreed to sponsor the center.

The $2 million in funds for the tunnel project will come from the IEDC’s Industrial Development Grant Fund. The total cost of the tunnel is unclear, but the IEDC's filing says the Pacers also have secured another $300,000 in unspecified matching funds for the project.

The grant is important for economic development, Fuson said.

According to the IEDC document, it will cost $900,000 to open the street for tunnel construction and to repave the road, and another $1.4 million to build the underground portion of the walkway.

The Industrial Development Grant Fund is a state-funded program that provides assistance for infrastructure projects in support of new or existing business development in Indiana. The IDGF is designed to support new job creation and investment in the state. Preference is given to projects which have a substantial effect on Indiana’s economic climate, according to the IEDC.

The Pacers’ new  training venue—slated to be complete by late spring or early summer 2017—will include a facility on the fifth floor where primary care, cardiovascular and sports performance services will be offered to the general public.

"The use and impact of this five-story, 130,000-square-foot facility extends far beyond sports, representing a commitment to continued economic development and growth in a state that is known for hosting world-class events," IEDC spokeswoman Abby Gras told IBJ in an email.

"As a St. Vincent medical facility, Indianapolis-area residents will have access to primary and preventive care, cardiovascular and sports performance services. The facility will bring a significant number of jobs and pedestrian traffic to the area, and this tunnel will enhance the safety and security of employees, patrons and visitors," Gras said.

The money was officially granted to Develop Indy, the economic development wing of the Indy Chamber. Officials said the organization is merely acting as a pass-through entity for the grant, funneling money to the Pacers. Develop Indy spokesman Jessica Higdon said the money hasn’t yet been funneled to the Pacers, “but it’s only a matter of time.”

“It’s state funding and a Pacers project,” Higdon said. “We’re just funneling the money through as an approved IDGF grantee. This is typical.”

Most of the Pacers Sports & Entertainment offices also will move to the center, allowing future re-purposing and modernization of current space in Bankers Life Fieldhouse.

The Pacers are paying the costs—last year estimated by team officials at $50 million—to construct and operate the facility while paying the city's Capital Improvement Board $1 per year in rent for the land usage. The CIB approved the project in August.

According to the agreement, the CIB would receive ownership of the training facility after a 40-year-period, or after 50 years if the Pacers take a 10-year extension option.

Pacers officials have said the new training facility is critical to attract high-level free agents and to compete for championships.

Indianapolis-based F.A. Wilhelm Construction Co. Inc. is the general contractor for the overall project, which was designed by locally based Ratio Architects.