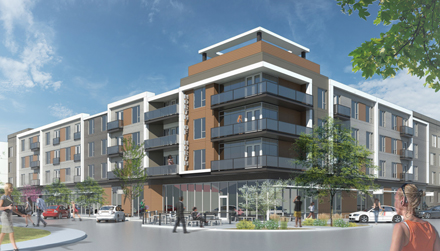 Another major mixed-use development is in the works for downtown Fishers, which in recent years has seen a surge of commercial and residential projects.

The city on Thursday morning announced it had received a proposal for a $47 million mixed-use project, dubbed North of North, on the northwest corner of North Street and Lantern Road. The Fishers City Council is expected to consider the project and $16.5 million in economic incentives at its meeting on Monday.

The project, which is a collaboration between three companies, is slated to include a three-story, 30,000-square-foot office building, 500-space parking garage and a four-story mixed-use building with 240 apartments and 5,000 square feet of commercial space.

Carmel-based RQAW Corp. would develop the office component and plans to invest $4 million to relocate its headquarters and 60 employees to the new building. The engineering and architecture firm would occupy 15,000 square feet of space on the second and third floors.

The relocation is contingent upon state incentives. The remaining space in the office building would be available for lease.

Indianapolis-based construction management firm Envoy Inc. and Hageman Group would develop, own and operate the parking garage and mixed-use building.

The parking garage is expected to be used by RQAW employees and residents in the apartment complex. Meyer Najem, which built its $5.5 million headquarters just north of the proposed development in 2014, also would use the garage for its employees.

The garage would be open to the public on evenings and weekends.

The residential portion of the mixed-use building would feature one- and two-bedroom apartments, including several live-work units on the first floor facing Lantern Road. The live-work units would have commercial entrances for offices or studios, and residential space for living.

“The live-work concept is unique to Fishers, but has worked well in other forward-thinking cities,” Envoy principal Scott Baldwin said in a prepared statement. “Situated near Launch Fishers and in the heart of the vibrant downtown, the development is designed to meet the needs of young, entrepreneurial talent in Fishers.”

The city is offering $16.5 million in economic incentives for the project to help finance the cost of land, fees, parking garage construction and hardscape like sidewalks and a public plaza.

Construction on the project would be expected to start later this year and complete by May 2018.

“This redevelopment project really raises the bar for our entrepreneurial city,” Fishers Mayor Scott Fadness said in a prepared statement. “A creative development like this one, that meets the needs of small business owners and establishes much-needed office space in the Nickel Plate District, brings significant value to our downtown and furthers the ecosystem in which entrepreneurs can thrive.”

The developers have agreements to purchase the necessary property, which includes small houses occupied by businesses and the current parking lot for Meyer Najem.

The announcement comes as several other multimillion-dollar mixed-use developments wrap up in downtown Fishers.

The $28 million Switch and $42 million Depot at Nickel Plate developments, which both added apartments, parking and commercial space to the area, are already complete.

The Edge, which is located on the northeast corner of 116th Street and Lantern Road, has recently started filling up with tenants as construction comes to an end. The $17.5 million development features a 61,000-square-foot, three-story commercial building and 330-space parking garage.