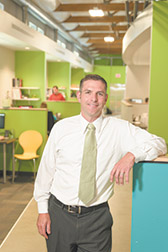 Architectural firm: Guidon Design designs buildings—“creative, sustainable buildings that let people live and work in an improved and better way,” President Luke Leising said. Most of Guidon’s clients are commercial, and most own and operate their buildings and plan to be in them a long time. The firm focuses its work largely on health care, with a subset focus on Indianapolis.

“What we do is understand how they want to deliver medicine and care, and then we design a building that helps them do that better.”

Other projects: Guidon has worked on several VA hospitals, which makes Leising, a former Army Ranger, especially proud. His firm also had a part in the new transit hub downtown and was selected to be part of the team working on a new section of the Cultural Trail.

“We love having a positive impact on our city,” he said.

Designed its office: Guidon also designed its own offices at 905 N. Capitol Ave., winning two Monumental Awards from the Indy Chamber for converting the former industrial warehouse into attractive and efficient offices.

The design “allows us to be more efficient in how we do work,” Leising said. “They love the space, they love the visual character of it, but it literally helps us work better. That’s what we try to do for our clients.”

Guidon turns 5: Leising started the firm in 2011, the same year he was named to IBJ’s Forty Under 40.

“Building the team is one of the most enjoyable parts of this. It’s not easy to hire people and integrate them and have them see the vision of what you want to accomplish. I’m proud of what we’ve done.”•