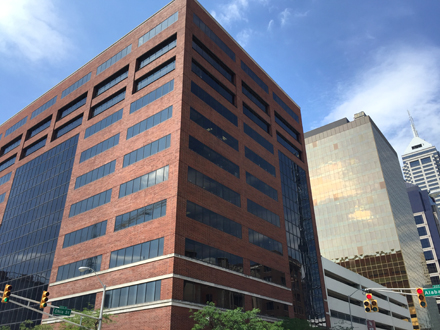 Mission Peak Capital in June closed on the sale of the buildings located within a block of one another that were placed in receivership in 2014 after their owner defaulted on a $28.5 million loan.

HSBC Bank USA National Association filed to foreclose on the properties and sold them last month to Mission Peak Capital, which considered redeveloping the buildings into apartments to take advantage of downtown’s strong residential market.

“We looked at alternate uses as well, but we’ve come to the conclusion that we’re going to keep them as office buildings,” said Chris Dunn, a Mission Park partner. “We have good tenants.”

Occupancy at both buildings is hovering in the mid-60 percent range, Dunn said.

With about 420,500 square feet, the 20-story Gold Building ranks as downtown’s 10th-largest office complex. It was constructed in 1975. One of its biggest tenants is the Marion County Public Defender Agency.

Dunn declined to divulge how much Mission Peak paid for the two buildings and an accompanying parking garage between them. The transaction has yet to show up on Marion County assessor records.

The records, however, show in July 2015, when HSBC Bank wrestled control of the properties from Hertz, that Hertz still owed $25.1 million on a $28.5 million loan it received in 2006.

“If an opportunity would present itself, we’d look at it,” he said. “But it’s not like we have a prescribed plan there. It would behoove us to hold it and let that area mature.”

The buildings, immediately north of the City-County Building and historic City Market, are situated in an up-and-coming area of downtown known as East Market District.

“We’re getting inquiries from companies that want to be close to the Cummins headquarters,” Owens said. “You put, on top of that, the Flaherty & Collins apartment project, and these buildings are right in the mix.”

Mission Peak’s purchase of the properties marks their entrance into the Indianapolis market. Founded in 2008, the firm’s investments typically range from $5 million to $50 million and focus on office, retail, hospitality and mixed-use properties.