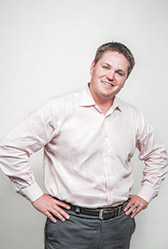 President Kyle Bach has targeted campuses that previously didn’t have student housing. His firm has built 3,000 beds so far and hopes to build 20,000 by 2025. He said schools with student housing typically have more success with student recruitment and retention. (Photo courtesy of Annex Student Living)

New dorms: Annex Student Living develops and builds student housing at colleges and universities that typically haven’t offered campus housing—usually Division II and III schools, community colleges and regional campuses of larger institutions. Annex has built at Indiana University campuses in South Bend, Kokomo, Richmond, Columbus and New Albany, and has just started a 575-bed dorm at IUPUI that will open in 2017 at the southeast corner of 10th Street and the White River.

The thought process: “There’s so much more to college than just the classroom,” said Annex President Kyle Bach, “and that includes being able to provide an environment for students to grow as individuals and create lasting relationships. That’s something you obtain through friendships in housing at larger institutions.”

Bach said schools with housing typically have more success recruiting and retaining students, and students who live in campus housing more often have higher grades than those who commute.

From the beginning: Bach’s background is in affordable housing. He was pursuing an opportunity in northwestern Illinois that didn’t get funded, but a president from the local community college saw his name in the paper and asked if he’d ever considered student housing. He met with her and built a business model.

A challenging sell: The biggest challenge Annex faces is selling the idea of dorms to educators, administrators, municipalities—and even students and parents.

“It usually takes some time for them to believe in the validity of student housing,” he said. “But now that we’ve proven it over time, that’s become a lot easier for us.”

Building up: Bach said the company has built 3,000 beds so far, and its goal is to build 20,000 by 2025. Annex’s most recent projects include housing at Indiana State University, the University of Central Missouri in Warrensburg and Kellogg Community College in Battle Creek, Michigan.•