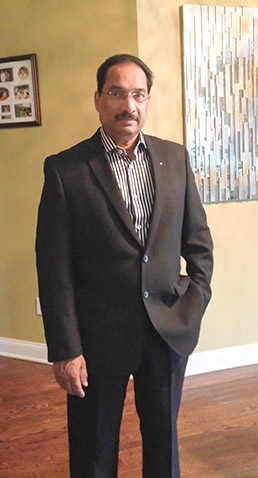 “We built a nice product up here,” he said. “People wanted it, and this market needed something like that. That’s what we saw.”

Good timing: Reddyreddy’s Holiday Inn Express, owned by his parent company, Star Estates, opened in 2012—two years after Eli Lilly and Co.’s Elanco Animal Health opened its $25 million, 135,000-square-foot headquarters in Greenfield. That added 350 jobs to the local economy and, “All of a sudden, we have a lot of activity in this market. It’s like a sleeping giant has awoken.”

From IT to hotels: Reddyreddy grew up in India and immigrated to the United States in 1997 to work in information technology. After losing his job when Hewlett-Packard and Compaq merged, he went into business for himself. He started with a Holiday Inn in Crawfordsville in 2006 (he still owns the property under another corporate name) and in 2009 applied for the license to build and operate in Greenfield.

Superior amenities: Reddyreddy said he built a better hotel, featuring superior decor and larger rooms. “I have guests who tell us we look like a boutique hotel. We don’t look like a Holiday Inn Express—except for the sign out front.”

Glad to grow in Greenfield: Greenfield is growing robustly, Reddyreddy said, and the next exit on Interstate 70—Mount Comfort—also has a lot of activity. Elanco and the automotive companies are expanding, and both Gander Mountain and Kohl’s are opening.

“Everybody’s doing good in town, and that is driving more business here,” he said. “The next five years are going to be great.” Reddyreddy is adding to the economic activity—he’s building a Marriott in Greenfield that is scheduled to open in late 2018.•