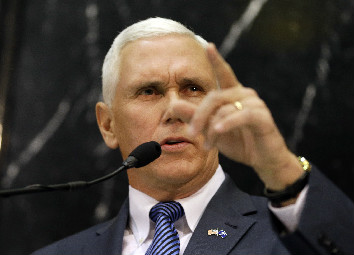 An amendment by then-Rep. Mike Pence to cut off federal funds for Planned Parenthood was one of the first proposals Republicans approved after taking control of the U.S. House in 2011. Three months later, the chamber passed another bill by the Indiana congressman to end tax breaks for insurance providers that cover abortion.

Social conservatism has been a guiding light in the 15-year political career of Pence, now the governor of Indiana and a top contender to be the vice presidential pick of presumptive Republican nominee Donald Trump. He has labeled himself "a Christian, a conservative and a Republican—in that order."

The case for Pence, who met with Trump and his family at the governor's home on Wednesday, is that he'd bring credibility with evangelical Christians and Republican-elected officials across the ideological spectrum, constituencies with whom Trump's reputation is shaky.

"I hope he gets the nod," said Illinois Sen. Mark Kirk, a former congressman. "I love Mike. He was the leader of the conservatives and I was the leader of the moderates. And we had a mutual admiration society." (Kirk, who's up for reelection, said "we'll see" when asked if he'd reconsider backing Trump if Pence is chosen, but his spokeswoman later called to say he would not back Trump no matter who the running mate is.)

A thin record in the House

An examination of Pence's legislative record during 12 years in the House reveals scant tangible achievements, instead pointing to a tenure marked by a desire to move the Republican Party and national debate in a conservative direction.

Of 90 standalone bills introduced by Pence during his tenure in the House, the 21 that passed were all "simple resolutions" about matters like placing a member on a committee or rebuking the United Nations, according to the legislative tracker GovTrack. Apart from those, just one Pence bill cleared committee, and then died—a 2005 bill to scrap limits on aggregate campaign contributions by a person in an election cycle.

Pence voted against numerous major Bush-era initiatives such as No Child Left Behind in 2001, the Medicare prescription drug benefit in 2003 (which passed by one vote) and the bank bailout of 2008.

"It's not as if he was a legislator who did more than take strong positions against these things," said Norm Ornstein, a congressional scholar at the American Enterprise Institute. "This was a guy who saw his role much more as being a super-magnet trying to pull his party and policy away from the center and toward the right."

Fittingly, the largest contributor to his campaigns and political committees from 1989 to 2014 was Club For Growth, a conservative group that often battles bipartisan deals, according to the nonpartisan Center For Responsive Politics. Pence may build bridges between Trump and conservative donors wary of his ideological bona fides.

Pence also gives some Republicans skeptical of Trump a dash of hope that he'd be able to steer the presumptive nominee in a more conservative direction. "I hope that he can move Mr. Trump on a number of these issues," said Flake.

But that doesn't mean he'd be the ideal figure to help Trump cut deals.

"The idea that Pence is going to be an effective liaison with Congress—he knows Congress, but he's not going to be the Republican equivalent of Joe Biden," said Ornstein. "He's not a dealmaker. That's not his modus operandi."

Before he was selected as Barack Obama's running mate, Biden was a 35-year veteran of the Senate with strong relationships across the aisle and steeped in the minutia of legislative sausage-making, which made him an asset for the president.

John Gregg, Pence's Democratic opponent in 2012 and again in 2016, has inveighed against his "radical agenda." The Indiana Democratic Party has accused him of "scaring good jobs away because of his radical social agenda." (Indiana's highest-ranking Democrat, Sen. Joe Donnelly, who formerly served with Pence in the House, declined to discuss him.)

After Republicans were demolished in the 2006 congressional elections, Pence, then a little-known upstart, challenged John Boehner, the ranking Republican, to lead the House conference. He received just 27 votes, the Associated Press reported at the time. Then he made nice, and two years later secured the No. 4 position in the House Republican caucus with Boehner's help.

"I like him a lot. A good choice. Solid conservative," said South Carolina Sen. Lindsey Graham.

"He would be a major upgrade for the GOP ticket," said David Schnittger, a deputy chief of staff to former Speaker Boehner, calling Pence a "gifted communicator and principled conservative."

Pence showed a dash of pragmatism and deal-making ability when he announced last year that Indiana would accept federal money to expand Medicaid, but in a unique way, rather than the standard approach under Obamacare in an effort to limit the criticism from conservatives.

For Trump, a downside of Pence is the explosive controversy that ensued after he signed the Religious Freedom Restoration Act in 2015, a measure he championed. The LGBT community and businesses ignited a furor, arguing it'd permit discrimination against gays and lesbians. In an interview with ABC's George Stephanopoulos, Pence dodged six opportunities to reject that argument, and conservatives criticized his handling of the issue. Under threat of an economic boycott, Pence eventually signed a fix to the law.

"That's the largest liability that Pence would bring to the table," said Laura Albright, a political science professor at University of Indianapolis. "The RFRA issue … got the state national attention in a very negative way. His popularity isn't what it once was."

The episode left a taint on Pence's gubernatorial legacy. Six months after the firestorm, a survey found 47 percent of Hoosiers approved of Pence performance, down from 62 percent in the survey one year earlier. One senior Republican aide said Pence lost some credibility on the right for botching the handling of RFRA and then backing down on the substance.

Now Pence is in a close race for reelection with the same opponent he narrowly defeated in 2012. Becoming Trump's running mate would be a risky move—it'd require Pence to drop out of the governor's race, Albright said, because Indiana law bars a candidate from simultaneously running for a state and federal office.

And yet the VP nod may be an escape hatch. Pence is widely rumored to have presidential ambitions, and losing reelection would arguably put him in a worse position to run for the White House in 2020 than losing while at the bottom of a ticket.

"Honestly, I’m just very humbled," Pence told reporters Wednesday, when asked about the VP speculation after he met with Trump and two of his children. "I’m out here running for reelection as Governor of the State of Indiana. I just have to tell you, whatever decision is arrived at, we’ll consider this to have been a great honor."

Trump is expected to formally announce his decision on Friday.