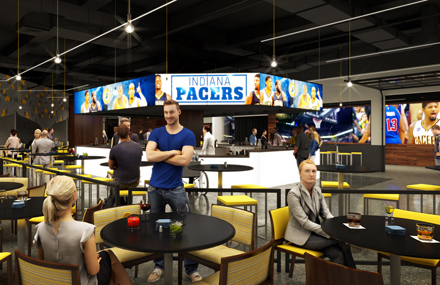 The Indiana Pacers Thursday are set to unveil a revamped floor-level restaurant inside Bankers Life Fieldhouse—and a new naming rights deal to go along with it.

The Locker Room Restaurant has been overhauled so completely that Pacers sales boss Todd Taylor said it will “be completely unrecognizable.”

“It will look nothing like it did before,” Taylor told IBJ. “It was stripped down to its studs and completely made over. This will offer fans a completely new experience.”

The restaurant also is getting a new name: The LightBound Courtside Club, named for locally based internet, voice and data services company LightBound LLC.

Though the Pacers did not divulge financial details of the naming rights deal, sports marketing experts pegged it in the mid-five to low six-figure range annually, adding that it’s likely a deal that combines trade and cash. Taylor said it’s a multi-year deal.

The restaurant—which looks out onto the Fieldhouse practice court and is adjacent to the players’ locker room—was originally called the Best Locker Room, in a naming rights deal with Best Lock. But Taylor said the restaurant and bar area hasn’t had a naming rights partner since that deal expired several years ago.

The restaurant’s bar, which was moved from a side wall to the center of the room, is the only piece of original furniture remaining, Taylor said. In addition to new furnishings, the overhaul includes new flooring, paint, lighting and more.

“The space has a much more open feel now,” Taylor said. “It will allow a lot better traffic flow. We think it reflects the social nature of sports right now.”

Taylor said the new design should allow more people to be served faster. He added that there’s space carved out in the restaurant for “private enclaves.”

The new design was done by global architecture and design firm Populous, which has vast experience working on professional sports venues, including projects at the Amway Center in Orlando, Florida; Yankee Stadium in New York; and The O2 Arena in London.

There’s been a move among professional sports teams nationwide to convert space to allow more movement and socialization among fans at playing venues.

Taylor said he didn’t have information on how much the project cost. 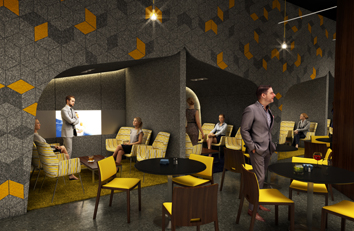 The renovation is being paid for by the city’s Capital Improvement Board as part of a $160 million, 10-year deal with the Pacers for the operations of Bankers Life Fieldhouse. As part of the pact signed by the city and Pacers in April 2014, the city agreed to make $33.5 million in improvements to the 17-year-old venue.

The new LightBound Courtside Club will be open before, during and after games to all Pacers ticket holders in the first seven rows of the Fieldhouse, to all Indiana Fever season ticket holders—known as MVPs—during Fever games, and to select ticket buyers during concerts and other events. Admittance is free for those individuals, but food and drinks will cost extra. As part of the overhaul, Taylor said the menu also is getting refreshed.

Pacers President Rick Fuson said the project is part of keeping the Fieldhouse one of the best venues in the NBA.

“We are very proud of our building,” Fuson said in a written statement.  “But one of our main concerns each and every day is to make this place not only the best in the state of Indiana but one of the best in the nation for our fans. This is their building.”

Officials for LightBound, which has been a Pacers corporate partner for several years, said their commitment to the Fieldhouse goes beyond the restaurant now bearing the company’s name.

“We are looking forward to working with the Pacers on the upgrades they are making to the overall fan experience at Bankers Life Fieldhouse …” said LightBound CEO Jack Carr.

When the official announcement is made at 9 a.m. Thursday, there will be a link on Pacers.com to a video tour of the new restaurant.