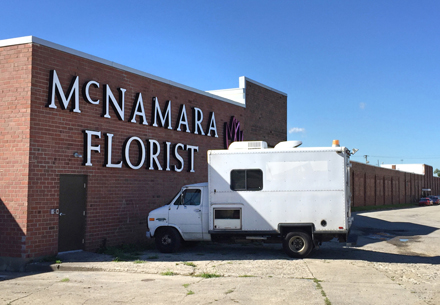 McNamara Florist so far has spent $2.5 million to renovate an old abandoned warehouse on the city’s near-northeast side and move its headquarters there in late June.

But the metropolitan area’s largest florist isn’t done refurbishing the 70,000-square-foot space at 1853 Ludlow Ave., on a thin stretch of land running between Massachusetts Avenue and Interstate 70.

Most visible to passersby will be a showroom and retail outlet at the east end of the building, where customers can buy flowers and other gifts. The store, which will be McNamara’s ninth, should open in early November.

McNamara CEO Toomie Farris isn’t sure what to expect, since there are no other retailers along the stretch littered with vacant industrial buildings. He’s encouraged, however, by the interest it’s generating from potential patrons.

“Downtown and the Old Northside and other neighborhoods aren’t that far away,” Farris reasoned.

The opening of the store should cap McNamara’s bold move from Fishers to an area that’s sorely in need of new investment.

McNamara Florist in March 2015 bought the 176,000-square-foot warehouse, once part of the old Master-Fit Corp. industrial complex, from Atco Products. Farris declined to divulge how much the company paid for the building but said the price was “embarrassingly cheap.”

The location offers a more central point of distribution to stores and close interstate access, which should benefit delivery service and support to local event venues, Farris said.

One of the biggest aspects of the renovation was the demolition of roughly 35,000 square feet to make way for an employee and customer parking lot. In November, McNamara sold the remaining 71,000 square feet—now separated by the surface lot— to RJE Business Interiors.

RJE, one of the area's largest office furniture sellers, moved its service division and warehousing operations to the building from its downtown headquarters at 621 E. Ohio St.

McNamara and RJE are the latest companies to invest in the nearly 500-acre area known as the Mass Ave/Brookside Industrial Corridor.

Many of the buildings—constructed before the interstate system transformed logistic—are in various stages of neglect. City leaders and economic development groups have encouraged property owners to tap grants and loans—and also have considered creating a tax-increment financing district—to help companies remediate properties and renovate the crumbling buildings.

“I’m pretty excited about it,” Farris said. “We’re putting a dot on here and then you connect the dots. Hopefully, others will follow.”

Northeast of the McNamara building is the former IVC industrial campus, which consists of three vacant buildings totaling 35,300 square feet on 7.7 acres, has been on the market for nearly five years. But there are signs of hope.

The property has attracted interest from at least one potential buyer who may or may not close on the property, said Ryan Kelly of Colliers International, who is listing the site.

Closer to downtown, efforts are under way to convert part of the 539,000-square-foot Circle City Industrial Complex at 1125 E. Brookside Ave. into “maker space”—a collaborative area where artisans have access to industrial tools and programing.

Teagen Development Inc., the building’s owner, and the Riley Area CDC are renovating the south end of the complex —a portion that is roughly 120,000 square feet. The maker space will take up about a quarter of that, with the rest allotted for retailers, restaurants, offices and studios.

McNamara, meanwhile, had occupied about 58,000 square feet in Fishers, but Farris figured he wouldn’t need quite that much at a new location. Although the building McNamara occupies now is quite a bit larger, the ceiling heights are lower, so the cubic feet isn’t much greater, he said.

The two buildings McNamara and RJE occupy, along with the one McNamara demolished for parking, originally were part of seven interconnected structures built between the 1920s and 1960s.

McNamara helped revive some of the history by exposing the original brick on the interior of the building, where it had been covered by plaster in the area where the company’s offices are now located.

McNamara was founded in Indianapolis in 1954 and purchased by Carmel-based Engledow Group in 1989 before Marsh Supermarkets Inc. scooped it up in 2001.

Marsh parent Sun Capital Partners sold its McNamara division to a partnership led by that company's president, Farris, in 2007.