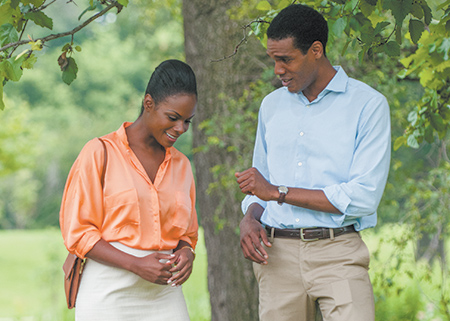 Just as we know the document will be signed before the conclusion of “1776” and the title boat will go down at the end of “Titanic,” we know Michelle Robinson and Barack Obama, the individuals at the heart—and I do mean heart—of the new movie “Southside With You”—will be a couple by the time the credits roll.

Set in 1989, the film (which opened in Indy Aug. 26) tracks the single day when the two embarked on what he—a law firm associate—claimed was a date. She—his supervising lawyer—insisted, at least at first, that it wasn’t.

As any interesting date/non-date should, the walk and talk portrayed here give the couple opportunities to espouse views on a range of subjects. Included: a playful-but-insightful discussion of Stevie Wonder recordings, the relative merits of pie vs. ice cream, and thoughts on the Chicago-set sitcom “Good Times.” Overlapping the last one are Obama’s thoughts on the work of artist Ernie Barnes, which adds an unexpected but important motif to the film.

Side note: If more attention comes to Barnes and his long-limbed creations as a result of the film, all the better.

Clearly, anyone who dislikes the current commander-in-chief but somehow finds themselves in the theater will be resistant to the film’s many charms, just as left-leaners would cross their arms if a film called “When Ronnie Met Nancy” were ever made. But, to be clear, “Southside with You” isn’t a documentary. Writer/director Richard Tanne has taken what’s known about the couple and sweetened it by, for instance, having Robinson witness Obama’s handling of a community organizing meeting—something that happened early in their relationship but not on the day the movie focuses on.

However, the date/not date did, in fact, lead to the duo’s attending the then-hot Spike Lee film “Do the Right Thing.” In fact, it’s helpful to go into “Southside With You” with a knowledge of the complex messages of the Lee film and the range of reactions audiences had to it. There’s a small masterpiece of a scene outside the theater that is amazingly subtle in capturing multi-character perspectives during an awkward encounter.

On a meta level, “Southside with You” raises a host of questions. White audiences made the comparable one-day/date film “Before Sunrise” enough of an indie hit to score two sequels. But would those same moviegoers bother to attend an equally solid film if it featured African-American characters who didn’t happen to be the future POTUS and FLOTUS?

The film would not be as effective if not for the subtle performances of Tika Sumpter and Indianapolis native and Wabash College grad Parker Sawyers. While hinting at the styles and personalities of the people their characters would become, both etch strong portraits of three-dimensional young adults uncertain about the validity of their choices but eager to make the right ones. Among their common struggles: learning to let go of baggage, finding common ground with oppositional forces instead of merely posturing, and facing rejection with hope.

One would assume these challenges also apply to most members of the audience, no matter their political persuasions.•