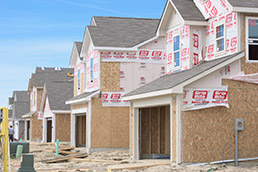 September was the second straight month of year-over-year increases in closed sales. There were 3,196 closed sales in 15 central Indiana counties in September. (IBJ file photo)

Home sales across the region were up 14.7 percent in September over the same month a year ago, according to the MIBOR Realtor Association.

It was the second straight month with an increase in the number of closed sales.

Prices were also up over the previous year, driven largely by tight inventory.

There were 3,196 closed sales in 15 central Indiana counties in September, MIBOR said.

“A second month of double-digit increases in closed sales is not atypical for early fall, but it’s certainly good news given our low inventory,” MIBOR President Roger Lundy said in a statement.

“Between pent-up demand and favorable interest rates, we expected the post-summer selling season to start off stronger than last year, and it did,” said Nancy Smith, president of the Indiana Association of Realtors.

“However, pending sales are up by just 2.4 percent,” she said. “This is a sign the all-too-familiar supply crunch stuck around in September, and many would-be buyers haven’t been able to get their foot in the door yet.”•