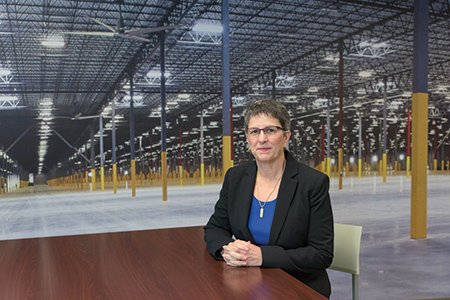 Dee helped transform Duke Realty Corp., a $7 billion company representing more than 137 million square feet of industrial and medical office space in 21 metro areas. She’s overseen three different $1 billion transactions without being intimidated by the numbers. “Sometimes I can’t decide whether to buy a pair of socks, but give me a billion-dollar transaction and I can do that, no problem.” She added: “Sometimes buying a small piece of land can be as hard as a big deal.”

Rising up: Originally from Madison, Dee earned a bachelor’s from Hanover College and a master’s from Ball State University before getting a law degree from the Indiana University Maurer School of Law. Stints with Emens Kegler Brown and Ritter in Columbus, Ohio, and Ice Miller in Indianapolis led to Duke Realty, where she began as corporate counsel in 1996 and, after a series of promotions, rose to her current position in 2013. “I thought my career path was to be partner in a law firm,” she said, “but I took a risk, decided to leap into the corporate world, and have not looked back.” A key difference between the two? “In a law firm, lawyers are income providers. In a corporation, you’re a drain on the bottom line.”

Career turning point: Dee left law school intending to specialize in labor law. But then a partner in the Ohio firm she worked for told her his clients who had labor work did not really want to work with women. She made the best of the sexist slight. “The firm had a lot of work in the real estate area, so I ended up specializing in real estate,” she said. It worked out well. “I like complex negotiations, organizational challenges, problem solving and the quick pace from the beginning of a transaction to completion.”

Difficulty of downsizing: After being named Duke’s general counsel, Dee had to downsize its legal department. “An associate whose job was eliminated called me after she got a new job. She said, ‘I knew that you were worried about me so I wanted to let you know that I have a new job and will be fine.’ Making downsizing decisions is very difficult and not considered an achievement, but this was an achievement for me. … I knew that she knew how concerned I was for her well-being.”

Choosing boards: After working 12 years in Duke’s Chicago office, Dee was eager to take advantage of her promotion to Indianapolis by becoming more involved, particularly with arts groups that have an impact on students. She now serves as board president for the Indianapolis Chamber Orchestra as well as a board member of the Indiana Repertory Theatre. “There’s not an artistic bone in my body,” she said, “but I have a huge appreciation for what artists do.”

Advice for young women in business: “Do what you say you are going to do, be really good at what you do, speak up, stay open to learning new things, admit when you do not know something, and think critically.”