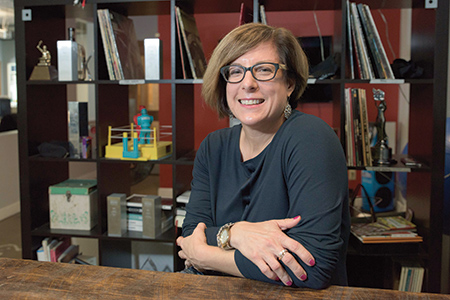 Working up to managing principal of one of the region’s leading public relations agencies, Dzwonar has led global campaigns and directed international marketing for clients, with a particular interest in crisis management projects.

Rising up: With an Indiana University degree in telecommunications, Dzwonar was media buyer for the McDonald’s account in Indiana, a public relations manager for Executive Media, and then joined up with Borshoff as an account manager. “We used to think it was fast-paced in agency PR,” she said, recalling taking floppy discs down the hall to print and scribbling appointments into day planners, “but that has changed so much, especially in crisis communications and issues management.”

Career turning point: “When I joined Borshoff at age 27, I thought I’d be there two to three years, then leave for a large corporation with hopes of living overseas.” After a few years, though, she realized “how happy and fulfilled I was working with great people on a wide variety of projects and clients.”

“Made it” moment: “There’s something about turning 30 in public relations/agency life that makes you feel as if people take you more seriously than they did just six months earlier.”

PR’s PR problem: “A huge misconception is that we can spin things,” she said. “We can’t change a reality and it’s not in our interest or anyone else’s to sell something that isn’t real. But if you have something that’s real—an issue, a product, a service—to educate the public on, we love doing that.”

Choosing boards: “My immediate reaction is usually yes—someone needs help and I want to help everyone,” Dzwonar said. “But that’s crazy. A few years ago, I did some real soul searching and asked, ‘What are the issues I really care most about?’” That’s what led her to Women’s Fund of Central Indiana and Early Learning Indiana (where she serves as board chairwoman). She’s also co-chairing the stewardship campaign at her church, co-chairing a fundraising event at her kids’ high school, and serving on the marketing committee of the IMA. “So I guess you’d say, volunteering is my dominant outside-of-work interest.”

Mentor: “Susan Matthews has been my ‘work spouse’ for all of my years at Borshoff—as a boss, mentor, friend, partner and guiding force. Even though Susan officially retired at the beginning of this year, she remains my sounding board and guide.”

Above and beyond: As a surrogate mother for co-worker Karen Alter, Dzwonar gave birth to a son in 2000. “Matthew is 16 now, and he and my boys think it’s the most normal situation in the world,” she said. “Karen and I have become unofficial consultants to other women and couples. It went so beautifully.”

Advice for young women in business: “Surround yourself with people who support your lifestyle and your success. Be the kind of boss you want to have and help your employees/colleagues to have fulfilling lives both at and away from work.”