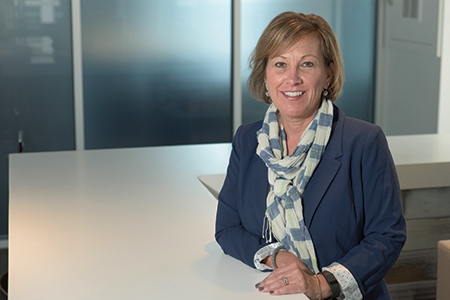 After helping grow the ExactTarget recruiting team from five to 45, Ray now attracts talent to High Alpha’s portfolio companies—including Lessonly, Sigstr, ClearScholar, Zylo and Doxly. Since joining in January, she’s helped build the teams for three companies as well as being involved in deciding which companies to invest in. “Talent is the foundation to future success—especially in a small company,” she said. “I’m so proud of the level of talent we have been able to attract at High Alpha. We are doing great things—and just getting started.”

Rising up: With a bachelor’s in management from Bentley University, the Hartford, Connecticut, native worked in various human resources roles and volunteer positions in seven cities over 10 years as a “trailing spouse.” She re-entered the workforce full time in 2006 at Aprimo in Indianapolis, followed by ExactTarget/Salesforce before settling in with High Alpha.

Career turning point: Ray was downsized in 2008 during challenging economic times. “It shook my confidence—especially since I had been out of the workforce for a stretch of time, and had just begun to get my career back on track,” she said. She spent most of 2009 reinventing herself by networking and expanding her skill set. “I took computer classes, began blogging and just increased my knowledge within the recruiting and HR arena,” she said. “I also became very proficient in social media—I was on Twitter before my kids.” The work paid off with the company she had her eye on: ExactTarget. “They posted a sales recruiter role and I was ready.”

“Made it” moment: “Reconnecting with Scott Dorsey, and being offered an opportunity to be part of the High Alpha team. I have so much respect for Scott, and loved my experience at ExactTarget—so it’s pretty awesome to be working with him again.”

A delicate balance: “These are small companies,” she noted of those in the High Alpha portfolio. “They are literally starting out around a conference room table and spending a lot of time together. How they get along and how they work together is the foundation of their success.”

Choosing boards: Ray serves on the board of Downtown Indy and accepts as many offers as she can for speaking engagements and participating on panels, often involving women in tech. “I do my best to stay focused on those initiatives,” she said, and considers herself “lucky to be asked.”

Mentor: Todd Richardson, former executive vice president at ExactTarget, “admitted early on he knew nothing about recruiting, so he empowered me to drive strategy and take risks, and he was there to challenge me and have my back as we implemented a new way to attract talent. He taught me not to take [life] so seriously—and always made work fun.”

Advice for young women in business: “I never thought of myself as less than a male counterpart. Take risks, communicate and don’t be afraid to speak up for yourself. … We need you, especially in the tech space. It will be challenging, but well worth it.”