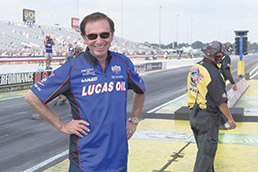 A southern Indiana native who founded California-based Lucas Oil Products Inc. in 1989, Lucas is a former trucker known in his home state because of the 20-year naming rights deal for Lucas Oil Stadium he made in 2006 for $121.5 million.

The secretary of the interior is in charge of the U.S. Department of the Interior, which oversees such agencies as the Bureau of Land Management, the United States Geological Survey and the National Park Service.

Politico first reported Trump’s interest in Lucas as a candidate for the job in September.

When reached by phone by IBJ on Wednesday afternoon, Lucas, 74, said he didn’t know if he was on Trump’s short list for the job. He indicated that he would be interested in such a position but that he’s made no commitment.

“It’s a very important position and you need to have someone in there who knows what they’re doing,” Lucas told IBJ from California.

When asked further about the possibility, after a brief pause, Lucas said his wife told him he wasn’t supposed to be talking about the topic. Lucas said he’s never met Trump in person.

Trump is interested in Lucas because he wants a “more business-friendly and business experience-heavy cabinet,” Politico reported, citing a person briefed by the campaign.

Appointing an oil executive as interior secretary would be sure to cause controversy, especially with environmentalists, Politico said. Lucas also founded Protect the Harvest, an organization that promotes farming, hunting and ranching, and advocates against many animal-rights groups.

Lucas Oil Products is based in Corona, California, but Lucas stays involved in Indiana. Earlier this year, Lucas agreed to buy the 38-acre estate once owned by the late Nancy Irsay at 116th Street and Ditch Road in Carmel. In 2010, he and his wife, Charlotte, paid $3 million to buy the former estate of Conseco co-founder Stephen Hilbert. Situated on 33.6 wooded acres fronting 116th Street, it includes a 25,000-square-foot mansion and another 30,000 square feet of outbuildings.

Lucas, who didn't go to college, told IBJ a year ago that one of his business philosophies is to "work yourself to death."