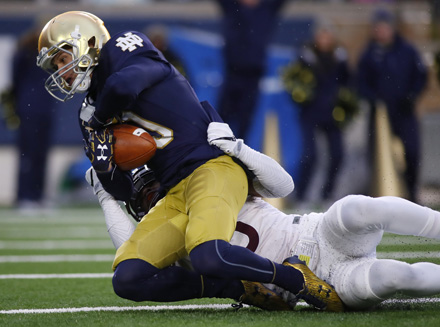 Brian Kelly's worst season at the University of Notre Dame took an embarrassing turn Tuesday as the NCAA announced that academic misconduct orchestrated by a student athletic trainer will cost the storied program all 21 victories from the 2012 and 2013 seasons, including the 12-0 run that vaulted the Fighting Irish into the national championship game against Alabama.

It marked the fourth time in history the NCAA has cited Notre Dame for a major rules violation. The vacated games include Notre Dame's 12 victories in 2012, their best regular season since winning their last national championship in 1988. The season finished with an embarrassing 42-14 loss to the Crimson Tide in the title game and the revelation that star linebacker Manti Te'o had been the victim of a fake-girlfriend hoax.

The school on Tuesday ripped the Indianapolis-based NCAA for its decision to vacate the wins and immediately said it would appeal. The Rev. John Jenkins, the university president, said the NCAA has never before vacated records in such a case.

"We believe that imposition of the vacation of records penalty without serious underlying institutional misconduct will not primarily punish those responsible for the misconduct, but rather will punish coaches, student-athletes and indeed the entire institution who did nothing wrong and, with regard to this case, did everything right," Jenkins said. He noted the NCAA has since voted to change the rule that brought this case under NCAA jurisdiction rather than leaving such decisions to individual schools.

The Division I Committee on Infractions panel also put Notre Dame on probation for a year and ordered a $5,000 fine, penalties the school agreed with. There were no bowl or scholarship punishments.

According to the NCAA, the trainer was employed by the athletics department from fall 2009 through the spring of 2013 and "partially or wholly completed numerous academic assignments for football student-athletes in numerous courses" from 2011 into 2013. It said she did substantial coursework for two players and gave impermissible help to six others in 18 courses over two academic years.

The NCAA said the woman "continued to provide impermissible academic benefits to football student-athletes for a full year after she graduated" and was in her first year of law school elsewhere.

In all, the NCAA said, three athletes would end up playing while ineligible, one during the 2012 season and the other two the following season, when the Irish went 9-4.

Kelly said he knew the vacated wins were a possibility since Notre Dame officials met with the NCAA several months ago. He said he had hoped "reasonable people would come to a reasonable decision."

He said he doesn't believe he has any culpability in the case and has no reason to believe he won't be back as Notre Dame's coach next season.

"I think you guys are confusing this statement with the win-loss record," said Kelly, whose struggling team has a 4-7 record ahead of Saturday's game at No. 12 USC. "A win-loss record is always under scrutiny at Notre Dame, and it should be. That's part of it."

The report doesn't name the players involved, but stems from an investigation that began in August 2014 , when the university suspended defensive lineman Ishaq Williams, receiver DaVaris Daniels, linebacker Kendall Moore and cornerback KeiVarae Russell, who weren't allowed to play that season.

The school later benched safety Eilar Hardy, who was allowed to return in midseason. Russell returned and played for the Irish last season. Quarterback Everett Golson was suspended for the fall 2013 semester for what he termed "poor judgment on a test."

Notre Dame players said after practice Tuesday that Kelly explained the NCAA announcement after practice. They said it has no effect on them.

"It's just a couple of guys made a mistake and the whole team goes down with it," left tackle Mike McGlinchey said.

McGlinchey said he wasn't worried about the victories being vacated.

"We know we won the games," said McGlinchey, a team captain. "They're not going to take that away from us. They can take it away in the record books all they want, but we won the games."

It was the first major NCAA violation for Notre Dame since 1999, when the school was placed on probation and had two scholarships taken away because of the relationship between Irish players and former booster Kimberly Dunbar, who embezzled more than $1.2 million from her employer and then lavished the players with gifts, trips and money.

The NCAA also lists two other major infractions : in 1971 for the improper administration of financial aid and in 1954 for improper tryouts.

If the NCAA erases all 21 Notre Dame victories, the Irish would fall from having the second-most wins in NCAA history behind Michigan (935) to fifth place with 875. That would place them behind Texas (892), Nebraska (889), Ohio State (885) and tied with Alabama (875) heading into the game against the Trojans, where they are 17-point underdogs.