At a time when most central Indiana golf courses are hurting for income, Harbour Trees Golf Club is getting a windfall
from a unique revenue source.

Harbour Trees raised $78,000 auctioning
off 18 tee-side sponsorship markers in June. It’s believed to be the first such sponsorship deal
not connected to a specific event. It’s certainly the first local golf sponsorship deal sold at auction,
and it’s a welcome revenue stream for the private Noblesville club.

The idea is so unique, said Lorryn Langton, Harbour Trees’ membership sales director, that *Golf Business Magazine is
doing a story on it, and courses as far away as Cleveland have called about how the local course executed its auction.

The sponsorship marker for the 18th hole alone brought a bid of $25,000. The auction was so successful,
Harbour Trees officials decided to auction off sponsorship markers for their 19th Hole Lounge and driving
range.

“We were amazed at the size of the turnout we had for
our auction,” Langton said. 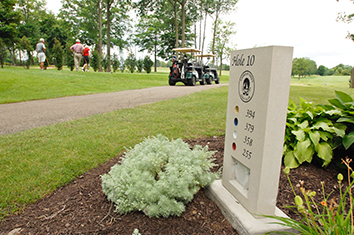 Club members Janet and Dick Crosser bought the 18th-hole
sponsorship, but most went to area businesses, including DMD Pharmaceuticals, Gordon Marketing, Harbour
House Insurance, Smith Jewelers and Burger King. All the sponsors were from the Noblesville and Westfield
areas, Langton said.

“Companies here in Hamilton County were
eager to put their mark on the course and get exposure among our membership,” Langton said. “For
some of these holes, like No. 18, we had a full-on bidding war.”

Harbour Trees, which has 200 golf and 180 social members, will use the revenue for cart repairs, clubhouse and kitchen upgrades,
and other infrastructure improvements, Langton said. Harbour Trees is an 18-hole Pete Dye-designed course surrounded by the
650-home North Harbour neighborhood near Morse Reservoir.

“This
whole initiative enhances members’ pride in the club and gives them a real sense of ownership,” Langton
said.

The idea came about last year when club member and local businessman
Dick Gordon offered to donate stone hole markers to Harbour Trees. Gordon wanted to put his companies’
names on some of the markers, and soon the club had other inquiries. Gordon put the names of his firms
on four hole markers.

While lifetime sponsorships were offered starting
at $5,000, most of the sponsorships are only good through 2010, and Langton thinks the initiative could
bring in five figures annually for the club.

“We’re thinking
outside the box and showing all is not doom and gloom in this economy,” Langton said. “We
think we’ve created a nice renewable revenue stream here.”

Milt Thompson, president of locally based sports marketing firm Grand Slam Cos. and part owner in The Trophy Club golf course
in Lebanon, said the initiative is a natural outgrowth of golf event sponsorship, which has proven effective for years.

“The revenue-to-expense ratio on this should be pretty strong,”
Thompson said. “That kind of revenue can equal several months of revenue for some local courses.”

Thompson said courses with large memberships and/or the highest demographics
will be able to generate the most revenue.

“This certainly has
worked for Harbour Trees, but I’m not certain that means it will work for every course,”
Thompson said.

Despite the success of the program, Harbour Trees officials
don’t have any plans to expand it.

“Every course has hole
markers, so this is just a case of maximizing revenue from them,” Langton said. “But we know
there’s a fine line between being creative and overcommercializing our course, and we want to respect that.”•