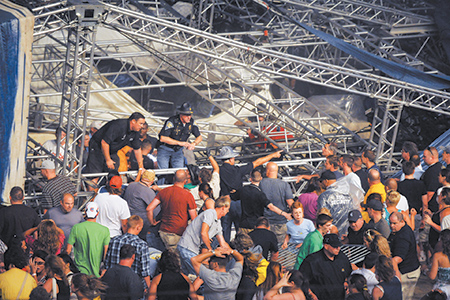 And the regulators in charge of the rule are months or even years away from replacing it.

The emergency rule, which established stricter design and construction requirements for outdoor event equipment such as stage rigging, expired nearly a year ago, on Jan. 1.

Indiana Department of Homeland Security spokesman John Erickson said permanent rule-making to replace the emergency regulations has already started. But he acknowledged the process can take up to two years.

“The rule is still being used as a guideline to assist with outdoor equipment safety,” Erickson told IBJ. “The agency is encouraged by the level of voluntary compliance with these guidelines.”

But Indianapolis developer Craig Von Deylen, member of the State Fire Prevention and Building Safety Commission, said he was disappointed the state “let the rule lapse” and said the commission could have noticed the impending expiration of the rule and acted had it been provided adequate staff to do its job.

“People died in an incident in the state prior to that rule,” Von Deylen said. “It cost the state a considerable amount of money in both legal fees and settlements.”

The emergency rule was originally set to expire in 2014. However, a bill passed by the General Assembly extended that deadline to Jan. 1, 2016, which gave state regulators more time to establish permanent rules. But commission members said the rule-making process started only this fall.

Von Deylen said the building safety commission is behind on its work because key legal and administrative staff positions once in place at the state level to review and update the codes have been eliminated.

He called for the governor to “provide [the commission] with adequate staff so we can do our job” and wondered if the governor could “sign an emergency order to make the rule come back into effect.” Gov. Mike Pence leaves office on Jan. 9, when Gov.-elect Eric Holcomb takes over.

Asked about the criticism, Erickson told IBJ “the Indiana Department of Homeland Security staff provides resources based on the Fire Prevention and Building Safety Commission priorities.”

“If there are projects for which the commission needs additional staff resources beyond what is currently in place, the agency will provide the expertise and staffing necessary,” he said.

The flap comes amid consternation about the possible lapse of other state codes the commission promulgates.

IBJ reported last month that critics were also carping about the Pence team’s decision not to renew the state’s energy code by the end of the year, which could leave the state without one for up to two years. The residential code is also set to expire in 2018.

But the outdoor event equipment rule that came after the state fair tragedy is striking a nerve.

In the wake of the tragedy, Washington, D.C.-based public safety and crisis management firm Witt Associates determined in an independent analysis that “the state of Indiana should adopt and implement stringent regulation of the type of structure that collapsed during the state fair.”

It also determined that “national model building and fire codes should be strengthened to reflect the increased complexity of such structures.”

The emergency rule instituted design and construction for equipment above a certain height—such as temporary or permanent towers, booms, ramps, platforms, overhead assemblies, and ancillary rigging—and required it to be inspected by the state. It also required the public to be kept far enough away from the equipment to be safe from a collapse.

Jason Shelley, executive director of the local chapter of the American Institute of Architects, decried that the rules are “merely suggestions now.”

“Nothing would stop the stage fair collapse from happening again,” Shelley said.

The state and 19 companies were part of a $50 million settlement reached in 2015 with victims of the stage collapse. The state paid $11 million of that total.•