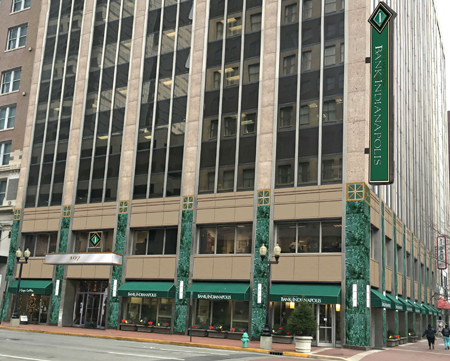 The 10-story downtown building that houses the headquarters of The National Bank of Indianapolis is about to get a major facelift.

Exterior work on the nearly $1 million project at 107 N. Pennsylvania St. should begin by the end of the month and finish by September, bank President Morris L. Maurer told IBJ.

“It’s our attempt to make the building fit our corporate image a little more, and also dress it up,” he said. “We have green marble on our [13] banking centers and we have certain canopies. Some of those elements are being replicated here.”

With 284 employees, The National Bank of Indianapolis is the area’s seventh-largest bank, according to IBJ statistics. It was founded in 1993 by Michael S. Maurer, a co-owner of IBJ Media, and is the largest locally owned bank in the area.

The bank has been headquartered in the 100,000-square-foot building since launching nearly 25 years ago with a single banking center on the first floor. Operations have grown from a single floor to now most of the building.

Upgrades to the first few floors of the exterior will include a new stainless steel entry canopy, verde marble-faced columns, decorative medallions and new light sconces.

Existing aggregate panels will be cleaned and resurfaced, black spandrel glass on the first and second floors will be replaced with new faux stone panels, and a new blade sign will be installed at the corner of Market and Pennsylvania streets.

“We really don’t have signage on the building,” Morris L. Maurer said. “It will be pretty prominent.”

The National Bank of Indianapolis bought the building in 1998, five years after opening the branch there, from Lacy Diversified Industries Ltd.

Originally called the Lemcke Building, it was constructed in two phases. The first seven floors were built in 1899, and the remaining three floors were  added in 1906.

The building was completely renovated in 1974 and given a contemporary facade, which has stood for more than 40 years.

Diana M.H. Brenner, president of locally based Brenner Design, is the architect on the facade revamp. The Indianapolis Historic Preservation Commission approved the design in July.

The National Bank of Indianapolis had hoped to start the project last fall but encountered problems trying to secure the correct marble. By the time it did, winter had arrived.