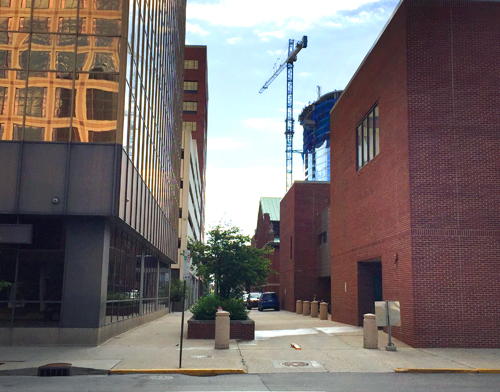 The owners of the two office buildings directly north of the City Market are considering a serious upgrade to the pedestrian walkway that splits the block, in addition to $8 million in planned improvements to the complexes.

Constructing a restaurant or office space in a portion of the walkway could be in the offing from co-owners Mission Peak Capital and Mariner Real Estate.

Now the owners are embarking on a roughly $8 million renovation of the two buildings, hoping to improve tenant occupancies that are hovering in the low-60-percent range.

But beyond that, they envision revamping a portion of the walkway south of the Gold Building, particularly given the additional foot traffic expected from the 28-story 360 Market tower project under construction one block to the east. Flaherty & Collins Properties’ $121 million apartment tower is expected to be finished by the end of the year.

“Once the project to the east is completed, we’re thinking of enclosing [part of the walkway] with a glass front for office space, or a restaurant,” said Chris Dunn, a Mission Peak partner. “We’re thinking about ideas there to better utilize it.”

The walkway is part of the property that Mission Peak Capital and Mariner Real Estate owns, along with the two buildings and parking garage that separates the structures. The path runs east to west between the City Market complex and the Mission/Mariner property, from North Delaware Street to North Alabama Street. 360 Market Tower is rising at the corner of Alabama and East Market streets.

“It’s on the planning table,” Dunn said of the walkway project, “and we’re giving serious consideration to that.”

Mission Peak Capital and Mariner Real Estate bought the buildings after they were placed in receivership in 2014. Their former owner, Santa Monica, California-based Hertz Investment Group, defaulted on a $28.5 million loan.

With strong demand for downtown apartment living, the owners had considered converting Two Market Square to apartments. But, “at the end of the day, it just didn’t make sense,” Dunn said. “We had tenants there that wanted to stay.”

The Gold Building is the larger of the two. With about 420,500 square feet, the 20-story structure ranks as downtown’s 10th-largest office complex. It was constructed in 1975. One of its biggest tenants is the Marion County Public Defender Agency.

The $8 million in renovations include upgrades to the mechanical systems, lobby enhancements and adding a tenant lounge on the first floor of the Gold Building. Improvements to the parking garage between the two buildings also are part of the plans.

“[Tenants] don’t want to commit until they know there will be some stability from the ownership side, and that’s benefitting us,” Dunn said. “Tenants are responding.”

Even though occupancy in the two buildings is only around 60 percent, that’s up from when Mission Peak Capital and Mariner Real Estate purchased them a year ago, when both were only about half-full.

Their purchase of the properties marked both companies’ entrance into the Indianapolis market. But it might not be their last local deal.

“It’s been such a positive experience that we’re looking to make a greater commitment to that market,” Dunn said.