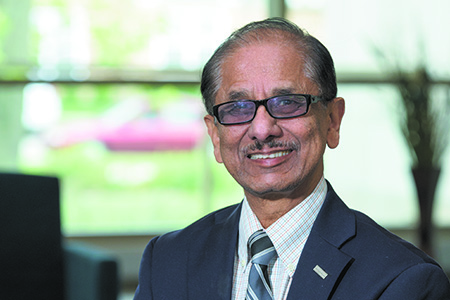 The power company Rajeshwar “Raj” Rao runs may not be huge—but the responsibility it bears is. After all, the Indiana Municipal Power Agency provides wholesale electricity to 61 small- and medium-sized communities in Indiana. That’s 330,000 customers in places like Spiceland, Jasper and Bargersville who rely on the company to keep the lights on.

For 31 years, Rao has served as president and CEO of the Carmel-based Indiana Municipal Power Agency. But the business is changing, and Rao’s organization is trying to keep one step ahead.

In the age of huge public utilities, small municipal power companies seem like a throwback to another era. Why is it still a good model?

Electricity is very important. When bigger companies come into a town, people don’t know them. They are an 800 number. But municipal power companies are your next-door neighbors. When you lose the lights, they lose the lights, too. They will make sure the lights come back on. And it’s a better way to give you lower prices.

How would you describe the IMPA to someone you just met? Is it a power generator? A middleman? An umbrella group?

In 1983, when we started, the municipalities wanted to buy the power together so we could get the lowest cost and more negotiating power. But by 1985-’86, we started looking into wholesale purchases. We concluded that producing our own electricity would not only be cheaper, but we would have control of our destiny.

So owning is better?

In our board meetings, we used to talk about renting a house versus buying a house. And we moved from purchasing wholesale to ownership. Today, we have $1.7 billion in assets [including four coal-fired units, seven combustion turbine units and 13 solar parks]. Eighty-five percent of all power comes from our own resources.

What percentage of Indiana homes and businesses would buy power from your members?

I think probably 5 to 6 percent.

So you’re not a huge player.

Global warming is happening. Whatever is the reason, we don’t know—whether it is the coal-fired generation or automobiles or humans exhaling carbon dioxide. I’m not a scientist. But whatever happens, we want to be prepared with a portfolio which is not dependent on any particular type of fuel.

Your organization has built 13 solar parks totaling about 25 megawatts, and you have said your goal is to develop a solar park in each of the 61 communities you serve. Why do you like solar so much?

What other kinds of fuel?

According to your annual report, coal still accounts for about 75 percent of your power generation. That’s lower than it was 20 years ago, but is it low enough? What is your goal?

By 2040, we want to get down to 50 percent from coal, and 50 percent from other sources. That’s a very aggressive target. We want to do it economically. If you plan ahead, you don’t have to spend too much money.

Time for a few personal questions. Can you tell me your age?

I’m not telling you. The culture where I come from, we don’t talk about it.

You grew up in India?

I came very early here. I was born in India but grew up here.

Indiana is a long way from India. What is your favorite food?

Well, my wife is a vegetarian, but I’m not. I live in Indiana. I like my steak.

What was your first job?

Working at Richmond Power and Light in 1977 as an electrical engineer.

What’s your favorite way to relax?