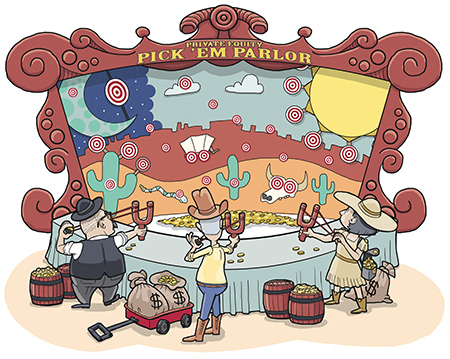 Picture this: Your wallet is fatter than usual, and you’re looking to invest the extra cash.

That’s a simplified version of the situation facing private equity firms these days. And although it might sound like an enviable situation, it comes with significant challenges, say those familiar with the industry.

Private equity firms use a combination of equity from investors plus debt to buy controlling stakes in companies. They hold the firms for a few years while working to improve their performance, with the goal of selling them for a tidy profit.

For a variety of reasons—including strong returns on past private equity investments—the amount of money flowing into the sector has been rising over the past decade or so. Funds are getting larger, and new players are entering the market. This translates into more competition for deals, driving up prices of companies and cutting into the returns private equity firms can get on their investments.

“We are seeing our local private equity firms raise funds over the last several years that are materially larger than the previous funds that they have raised,” said Jim Birge, the mergers-and-acquisitions partner at the law firm Faegre Baker Daniels. “It’s become a very competitive dynamic for acquiring businesses.”

Central Indiana has a handful of major private equity players, including two—Hammond Kennedy Whitney & Co. Inc. and Centerfield Capital Partners—that have more than a half-billion dollars in capital under management. The third-largest local player, CID Capital Inc., has $221 million under management.

Centerfield began raising capital for its fourth fund in January 2016. The goal is to raise $300 million, and “we’re very close to getting there,” said Scott Lutzke, a founding partner. The new Centerfield fund will be about $100 million larger than its last fund, Lutzke said.

He declined to give more details for fear of running afoul of Securities and Exchange Commission rules on investor solicitation.

Hammond Kennedy Whitney and CID declined to say how much capital they have available for investment—known in industry parlance as “dry power.” In general, detailed information on private equity firms nationally is difficult to come by, since most of the players are privately held.

But research shows a torrent of new money has poured into the sector over the past decade.

“That’s a staggeringly high amount of money to be in the global market,” said Maggie Musgrave, a corporate development associate with Indianapolis-based LDI Ltd. “There is a lot of money running through the system right now.”

Why has so much money flowed into private equity? One big factor: Returns on private equity investments have outpaced stock market returns in recent decades, making the funds more attractive to institutional investors like pension funds, large banks and insurance companies.

One of those relatively new investors is the Indiana Public Retirement System, which includes the Public Employees Retirement Fund and the Teachers’ Retirement Fund. The pensions have allocated hundreds of millions for private equity since the General Assembly in 1997 lifted a prohibition on investing in anything riskier than bonds.

In the 1990s, venture capital funds focused on tech startups. After that tech bubble burst in 2000, a lot of those funds lost money and some investors turned to private equity because they perceived it to be safer, Haeberle said.

A more recent market collapse—the one fueled by the Great Recession of 2008 and 2009—stung many private equity firms, leaving them with steep losses on investments. But after the meltdown, firms could be bought for a pittance—and private equity firms jumped in to capitalize.

Private equity firms made a lot of money on these deals, Musgrave said, which meant they had more money to use for future investments. The firms’ success also attracted new players, which launched funds in hopes of getting in on the action.

“You’re at the poker table, and suddenly there are a lot more chairs and a lot more coins,” Musgrave said.

This situation—more investors with more money—is creating pressure within the industry.

Investors that put money in a private equity fund don’t want that fund sitting idle: They can’t make money unless the money is deployed.

This means, Dennis said, that private equity firms are “under dire pressure to invest that as quickly as possible.”

And with more players with more money to invest, competition for deals is heating up.

“The thing that keeps a private equity manager awake at nights is deal flow,” Lutzke said.

Private equity firms want to pull the trigger on deals, Lutzke said, but they also want to be selective, finding high-quality targets that are likely to increase in value.

“We want to make sure that, with more money, we see more quality deals,” he said.

Private equity firms also are competing to buy companies with a host of other suitors, such as businesses that operate in the same industry. Such firms sometimes can justify paying more because of synergies and economies of scale.

“We’ve been seeing those multipliers about one or two steps above where they should be,” Musgrave said. “That could be between tens of millions to hundreds of millions in a purchase price.”

As an example, a company with annual EBITDA of $15 million priced at eight times EBITDA would sell for $120 million. Priced at 10 times EBITDA, the purchase price rises to $150 million.

Part of what’s heating up the sector is that banks began lending more freely after recovering from the Great Recession, Phenicie said. As a result, private equity firms can borrow larger sums and do bigger deals, which drives up valuations for companies they might acquire.

Paying more money for a company at the outset pinches returns when it’s time to cash out.

A few years ago, Musgrave said, private equity firms might expect to see returns of 25 percent to 30 percent from an investment. Because purchase prices have risen so much, those returns are now in the range of 16 percent to 20 percent.

Rates of return might slip even further, IU’s Haeberle said. “How much lower can it go? Who knows?”•