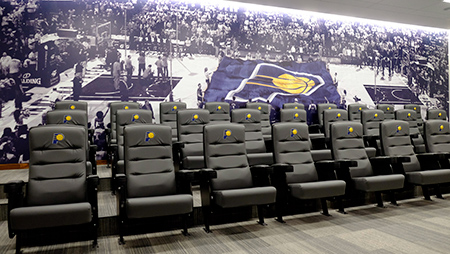 A good chunk of the building—including areas for Pacers players to train, recover and eat—will be off-limits to the public. That includes a film room with stadium-style seating and massive seats, as well as a sauna room with two large whirlpool tubs and another with an underwater treadmill.

St. Vincent will occupy the fourth and fifth floors. The fourth floor will offer primary care and cardiology services to Pacers players and the general public. The fifth floor will have a large sports-performance center—complete with a 68-yard turf area, a zero-gravity treadmill and special units built into the floor to measure how a person walks or runs.

St. Vincent officials said they’re already taking appointments to see patients in the primary care and cardiology facility, which can handle up to 40 patients a day.

The hospital system decided to offer cardiology services downtown due to the needs of the Pacers players and the public, St. Vincent officials said. Some enhancements—including raised ceilings in some of the exam rooms and extra-long and extra-large treadmills used to test the heart—are intended to accommodate players.

St. Vincent, which has been a Pacers sponsor for almost a decade, was announced at the ribbon-cutting as the “exclusive health care provider of the Pacers.” Financial terms of that deal were not disclosed.

The facility, which was designed by locally based Ratio Architects, has an 8,500-square-foot rooftop garden, which currently features basil, corn, lettuce, radishes and bok choy. The vegetables grown will be used in-house by the Pacers’ food-services provider, Levy Catering, and donated to Second Helpings, a local not-for-profit focused on hunger relief.

The practice courts—adorned by massive signatures of Leonard and Walsh—and other rooms in the facility feature large windows with panoramic views of the city to the south, east and west.

The Pacers own the facility and will pay the Capital Improvement Board, a municipal corporation, $1 per year in rent for the land usage. CIB unanimously approved using the land for the project in August 2015. The team and St. Vincent declined to disclose the hospital system’s financial arrangement with the Pacers.

The public entrance to the facility is off Delaware Street, with adjacent parking. Pacers players and officials can access the facility via an underground tunnel from Bankers Life Fieldhouse. The tunnel cost about $2 million to construct and was funded by the state through the Indiana Economic Development Corp.’s Industrial Development Grant Fund.

Pacers players and executives are confident the facility will help the team remain competitive and attract free agents.

“You look at the whole league and it feels like a bit of an arms race,” Kevin Pritchard, Pacers president of basketball operations, told the media at the ribbon-cutting. “We wanted to make sure our focus is on taking care of the players and sports performance.”

The training space the Pacers occupied in the fieldhouse will now be the sole domain of the WNBA’s Indiana Fever. The office space vacated within Bankers Life Fieldhouse is being repurposed and could include some new public spaces, team officials said.•