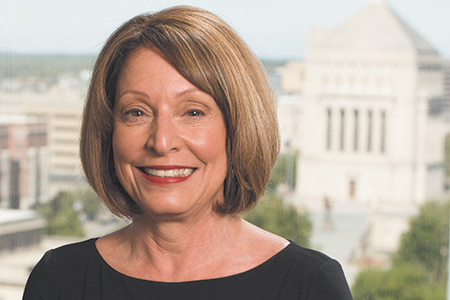 One of the go-to bankruptcy attorneys in the Midwest with honors including repeated U.S. News & World Report “Best Lawyers in America” designations, Caruso has served as counsel to both the Indianapolis Bar Association and the Indiana State Bar Association.

Rising up: Armed with a bachelor’s in forensic studies from Indiana University and a law degree from the Indiana University Robert H. McKinney School of Law, Caruso landed at Dale Eckerle and Eke (now Dale & Eke), where she remained for 35 years before joining Rubin & Levin in 2016. “As I looked into the sunset of my career, I didn’t want to coast out. I felt that I could grow and do more things at a firm more involved in the type of work that I do.”

Bankruptcy misconception: “The perception can be, ‘If you had to file, shame on you,’” Caruso said. “But I don’t believe the public sector realizes that so many people are forced into a bankruptcy because they are seniors who can’t live on Social Security, students with overwhelming loans, and people with high medical bills because of lack of health care. I counsel that they can’t look at it as a shameful event. They have a right to a fresh start. And it actually can be good for the economy. Those people will hopefully start a new business or be employed and spending and consume again.”

Up to the challenge: Appointed Chapter 7 bankruptcy trustee for ITT Educational Services Inc., Caruso had to make sense of what was left of 137 campuses, where 8,000 people were laid off and 40,000 students left to fend for themselves. “I was handed the keys and only five people to work with for just two weeks.” Problems included everything from overgrown weeds to a black bear on one of the properties. There was an $8 million tax issue, $140 million in retirement plans and a $7 billion class action. “At 61 and after practicing for 36 years, I have learned many new things, some that I wanted to know and some that I did not.”

Givebacks: Caruso serves on the board of governors for the Indiana State Bar Association and the board of the Indianapolis Bar Association, both important “in order to contribute to programs and develop policy that will make our profession better and to also assist in the many pro bono and charitable programs. I also feel it is important to look to the future for our younger lawyers—one being my daughter who is in her second year at [IU] Maurer School of Law.”

Inspiring dance: Caruso has taken the same ballet class with the same teacher and the same group of women for 33 years. “We have developed a very close special relationship. We have celebrated marriages and births and cried over deaths and tragedies, saving thousands of dollars on counseling.”