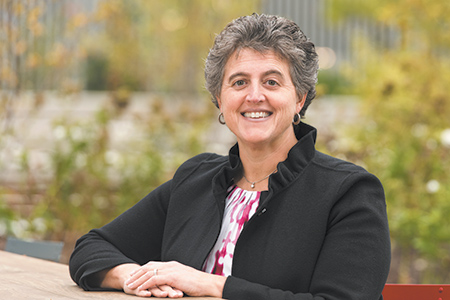 As if managing global litigation and serving as lead legal adviser on product safety issues for Cummins, or championing legal equality for the LGBT community isn’t enough, Margolin is also a dedicated mentor, winning the Massaron Award for Advancement of Women in the Legal Profession.

Rising up: In fifth grade, Margolin read “To Kill a Mockingbird” and thought, “Gosh, that would be a great career.” Knowing she wanted to be a litigator, she earned a bachelor’s in speech communications and followed it up with a law degree from DePaul University College of Law. She worked for the Chicago Housing Authority while in law school and in her first year as a lawyer, then moved to a small firm representing hospitals, doctors and nurses in medical-malpractice actions. In Indiana, she became an associate and then partner at Locke Reynolds (which became Frost Brown Todd) before moving to Cummins in a variety of jobs leading to deputy general counsel.

Inspirational moments: At Cummins, she learned that “practicing law has taught me a lot more than the law. I sit on business leadership teams at the company where I am expected to be ‘all in’ on the issues at hand, even when they don’t involve a legal issue. … I love the challenge that being both a lawyer and a business partner and counselor has added to my career.”

Mentor: “I work for an incredible general counsel [Sharon Barner, a 2016 Women of Influence honoree] who has given me out-of-the-box opportunities and mentored me to truly appreciate that the way we work is as important as the results we get from it. And the president of the (power systems) business unit—a 25-plus-year Cummins employee (Norbert Nusterer)—has been an incredibly devoted mentor. He invests in my future and checks in on my present in the most genuine and caring way I’ve ever experienced.”

Givebacks: Margolin works with Indiana Legal Services, which provides legal services to low-income LGBT individuals who are facing hurdles with basic employment, housing, identification and health issues. She also serves on the Defense Research Institute’s National Women in the Law committee, which promotes women and other diverse lawyers in the legal profession. “I have also gotten involved or given time to organizations that would benefit from having a lawyer’s guidance during a difficult time or when dealing with a particular legal issue. We have a specialized skill set that is sometimes needed, and I don’t have to be passionate about a particular organization’s mission to dive in short term and assist the organization with something that is near and dear to it and its members.”

Impactful musical: “Hamilton.” “There is something about that story and what is playing out now in these supposedly United States with immigration and DACA … that has me fixated and pensive on history. And the fact that it was cast with all diverse actors and performers is a true testament to the best of the arts.”