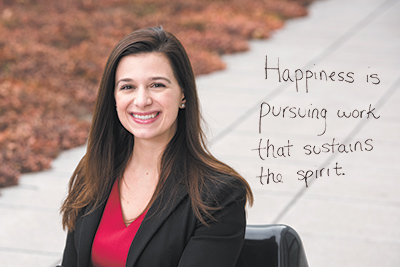 The Star’s star investigative reporter has been a key part of award-winning projects about sexual abuse at USA Gymnastics, children’s mental health services, and problems at Adult Protective Services in Indiana.

Getting here: “I never wanted to do anything else,” said Kwiatkowski of her early interest in journalism. “As a 6-year-old, I asked for a typewriter for Christmas.” She landed her first internship at 15 with a Michigan weekly and worked with the Detroit Free Press the summer after high school. Reporting gigs took her to the Grand Haven Tribune, the Florence Morning News and WBTW News13 in South Carolina, The Times of Northwest Indiana, and then to The Indianapolis Star.

Transitional moment: “I was really happy at The Times of Northwest Indiana doing work I was passionate about. I loved my bosses. I loved my co-workers. [But] I felt like the professional growth I would have at The Star would move me further to where I wanted to be.”

Major achievements: Her investigation into USA Gymnastics (in conjunction with two other reporters) revealed officials failed to report all allegations of sexual abuse to authorities, with more than 250 women coming forward with allegations against a prominent sports physician. Not only did the series lead to a guilty verdict against team physician Dr. Larry Nassar, but it also resulted in a Senate bill making failure to report sexual abuse a federal crime. Her investigation into Indiana Adult Protective Services described abuse and neglect, with state officials eventually approving additional program funds. Her story “The exorcisms of Latoya Ammons” became the most-read story in The Star’s history.

In the pipeline: Kwiatkowski said she always has at least 20 story ideas, “but at any given time, I’m maybe working on five.”

Givebacks: Kwiatkowski is past president and serves on the board of the Indiana Professional Chapter of the Society of Professional Journalists. She previously served as vice president of Girls on the Run of Central Indiana, board chair of Girls on the Run of Northwest Indiana, and a board member for Junior Achievement of Northwest Indiana. “Before I agree to be in any board, I’ve gotten to know the organization and looked at the financials.”