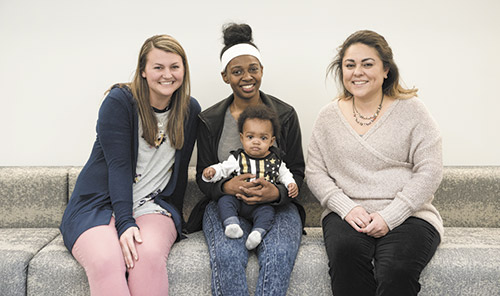 Those are ambitious—some might say impossible—challenges. But a program Goodwill introduced in Indianapolis in 2011 is working so well, it’s spread to 32 counties and now stretches from Lake Michigan to the Ohio River.

Goodwill leaders in Indianapolis were looking for resources for pregnant teenagers enrolled at the not-for-profit’s Indianapolis Metropolitan High School when they discovered the Nurse-Family Partnership. It’s a program developed in Denver more than 40 years ago that pairs Medicaid-eligible, first-time mothers-to-be with registered nurses who coach them through their pregnancy and beyond.

Unique Johnson was a scared, 17-year-old high school student when she became the first mother to enroll in the program in Indiana. “Everything was overwhelming to me then,” said Johnson, who was paired with nurse Marilynn Berry-Stamm. Now in her own apartment and earning a living wage, Johnson and her son, Ezra, are still in touch with Berry-Stamm.

“Unique faced many struggles, but she handled them so well,” Berry-Stamm said. “I did and still do appreciate what she is capable of, and that feeling continues with my clients today. These women are incredibly strong survivors who all want to be good moms. … I can see the potential each has. They have to get to the point where they see it, too.”

The team of Johnson and Berry-Stamm was the first of many. By the end of 2017, the Nurse-Family Partnership had served a total of 2,300 families. Through 2016, 93 percent of the mothers served delivered full term, and 90 percent of the babies had a normal birth weight. More than half of smokers quit before their babies were born.

A 2015 financial analysis of Goodwill’s program estimated that, by the time a Nurse-Family Partnership child turns 18, the benefit to society for that child will total $52,169, a $6.62 return for every $1 invested.

The state and Gov. Eric Holcomb are so impressed with the results that they’ve identified Nurse-Family Partnership as a key resource in battling Indiana’s infant mortality rate of 7.3 deaths per 1,000 births, increasing funding by $5 million over the next two years. Lilly Endowment kicked in another $2.5 million. All told, Goodwill expects to invest more than $8 million in the program in 2018, said Kent Kramer, president and CEO of Goodwill of Central & Southern Indiana.

For the promise it’s shown as a force for transforming the lives of Indiana families, the Nurse-Family Partnership is the top honoree in the Health Care Heroes Community Achievement in Health Care category.

Goodwill’s special twist on Nurse-Family partnership is to continue the program’s formal relationship with mothers beyond the child’s second birthday, which is when a nurse’s official role ends. At that point, mothers can enroll in a three-year graduate program that pairs them with a life coach who helps with school, job-readiness and housing. Kramer said a recent assessment of the graduate program showed that 50 percent of participating households had increased their income and benefits, and 79 percent of moms had achieved higher levels of formal education one year after enrolling.

Kramer said the program for expectant mothers, which is ramping up to serve 1,500 families in 2018, still has a long way to go to meet demand. With about 14,400 Medicaid-eligible, first-time births in Indiana every year, it’s no surprise there’s a waiting list to get into the program. Enrollees hear about it from hospitals, clinics, high school counselors and community centers and by word of mouth.

Fortunately, the program is also a draw for nurses. The number of registered nurses it employs, 46, should grow to 60 by the end of the year, and Kramer isn’t worried about finding them.

“Nurses are attracted to the opportunity to coach a willing, young family,” he said. Seeing long-term results is a good alternative to the burnout nurses often experience in a hospital setting, Kramer said. “We don’t have a lot of turnover.”

Inevitably, the nurses and their young mothers become friends. That’s what happened for De’Janae Simpson, who found out she was pregnant at age 16. “I didn’t know how I was going to raise a baby when I was still a baby myself,” Simpson said.

But her nurse, Angie Lazaro, put Simpson at ease. “She was like another friend to talk to,” Simpson said. “We had different topics to discuss every week, and she wouldn’t judge me about anything.”• Read more Health Care Heroes profiles.