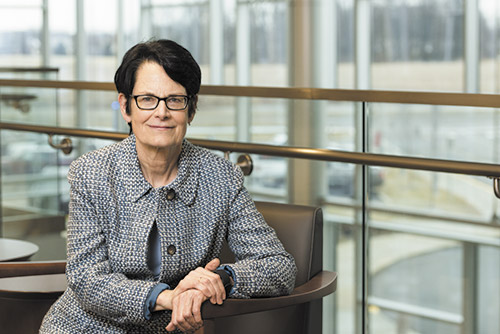 Dr. Paula Gustafson is known as “the physician you want your children to see.”

Dr. Paula Gustafson might be one of only a few practicing pediatricians whose early training had more to do with transmissions than toddlers.

Gustafson, 63, grew up in Michigan, where kids like her who were interested in engineering naturally gravitated toward the auto industry. She worked at Cadillac Motors while studying at General Motors Institute, now Kettering University, then went to the Massachusetts Institute of Technology for her master’s in engineering.

After giving a presentation on some of her thesis findings at Cummins Inc., which had extended her a research grant, Gustafson was offered a job at Cummins in Columbus, Indiana, where she worked for 10 years—a stretch that included studying in France for an MBA in international business.

Despite all that training, Gustafson felt a pull toward medicine.

“It was something I always thought of doing because I like interacting with people and I love science and data,” said Gustafson, who had gotten married and had four children before she decided to switch careers. “I’d already had some pediatric training.” She had a fifth child after starting medical school at Indiana University.

After her pediatrics residency at Methodist Hospital, she learned from an OB-GYN colleague that Shelbyville needed a pediatrician. She and the colleague both began practicing in Shelbyville in 1997.

“I figured if he was there delivering babies, I’d have a source of patients,” Gustafson said.

Her practice, Shelbyville Pediatrics—now called MHP Pediatrics—has kept Gustafson busy the last 20 years and turned her into a legend of sorts in the town.

“She’s known to the entire community as the physician you want your children to see when they’re sick,” said Jennifer Claxton, who says Gustafson saved her newborn daughter’s life by diagnosing a rare cancer others had missed. “When asked how she could see what so many others had overlooked, Dr. Gustafson modestly told us that she had changed over 12,000 diapers over her career and she knew when something didn’t look right to her.”

Gustafson’s detective skills are sometimes deployed outside the exam room. Like the time she tracked down a histoplasmosis outbreak at Shelbyville High School.

“What’s cool in a small town is, you kind of know everybody,” Gustafson said. That came in handy when two or three students came to her with chest pain and fever. She knew of a few teachers at the school who’d reported the same symptoms. So she and a radiologist worked together to track down the problem: histoplasmosis spores that had been disturbed during a construction project at the school.

Gustafson’s popularity with patients and her dogged pursuit of answers to medical mysteries has earned the respect of her peers, who elected her chief of staff at Major Hospital. It’s a role she eventually relinquished, though she started this year as its chief medical officer.

One of Gustafson’s passions is raising awareness of the problem of childhood obesity.

She and a team of doctors and athletes formed a team for the Race Across America bike ride in 2012 and she walked across England in 2017, events she used to model an active lifestyle for the community at large. “To be seen as a credible source of information, you have to live what you’re preaching,” Gustafson said.

She also developed the Major Easy 3 campaign, a simple way to talk to patients and their families about healthy eating. The three rules of Easy 3: Drink milk with meals, drink only water for refreshment, and eat all meals at the table.•