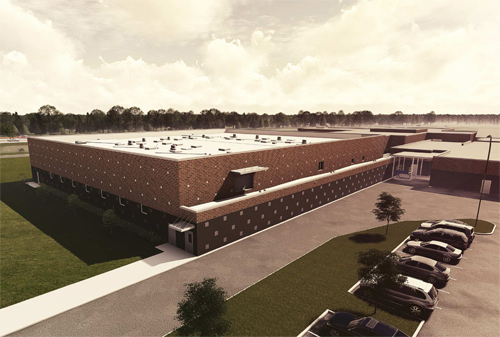 Construction has begun on the first phase of a project that eventually will add 256 new beds to the Hamilton County Jail in Noblesville, and county officials are weighing whether to get moving on the second phase so it could be finished at the same time.

Officials broke ground Tuesday on the expansion, the first phase of which is designed to add 120 beds to the facility and cost about $13 million, funding that already has been appropriated by the county council.

County officials say the current 123,000-square-foot jail facility, built in 1993 to hold 296 inmates, is overcrowded. Its population currently is pushing 400.

For years, officials debated how best to accommodate an increasing number of inmates, eventually choosing to expand the current facility to add up to 256 beds. The expansion, totaling roughly 20,000 square feet, is the first major housing project the facility has seen since opening 25 years ago.

Construction on the first phase of the expansion is expected to be complete by next April. In addition to inmate housing, it will include an interior recreation area and classroom and medical support space, as well as a shell for the second phase.

The second phase would add 136 beds, bringing the total to 256. The commissioners have asked the council to allocate funding for the second phase so it could be completed at the same time as the first. The council is expected to discuss funding at its meeting next month.

Officials say a change in state law a few years ago that requires counties to sentence low-level felons to county facilities instead of state prisons has contributed to the influx of inmates.

“We’ve done all that we can do with the campus and complex so far,” said Sheriff Mark Bowen. “We’ve had no choice but to break ground (on an expansion).”

Commissioner Steve Dillinger said seeing the project take flight is especially rewarding for him since he was around when the facility was originally built with the intention to add additional housing in the future.

The jail expansion is one of two capital improvement projects Hamilton County is currently undertaking. Last week, the county council voted to fund a roughly $25 million addition at the government and judicial center.