Home » How will the latest show at Actors Theatre of Indiana end? That’s up to the crowd. 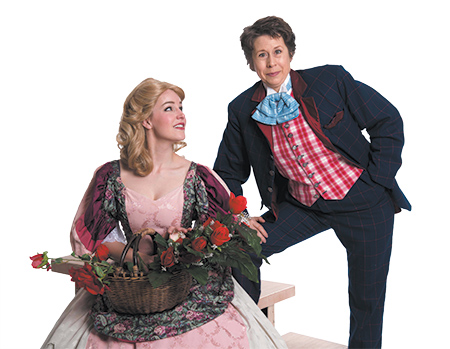 Most musicals come complete with a beginning, a middle and an ending.

And then there’s “The Mystery of Edwin Drood” (April 27 to May 13 at the Studio Theatre), which has the first two but—instead of a single denouement—offers endings, plural.

For the audience, that means an added level of fun—and control—given that it gets to vote.

The gimmick creatively solves the problem of adapting Charles Dickens’ never-finished novel. The author’s sudden death in 1870 left readers who had been devouring his serialized novel hanging.

More than a century later, Rupert Holmes had an idea about how to wrap it up.

Holmes adapted the not-quite-complete novel into a musical in which a tribe of Victorian actors attempts to stage the story. Where Dickens stopped writing, the actors stop singing and dancing.

Instead, they turn to the audience to make crucial decisions.

DJ Salisbury, who directed the play at two previous theaters before taking on the assignment with Actors Theatre of Indiana, said the play offers unique challenges. Unlike the use of a similar gimmick in the cult-hit film “Clue,” offering Drood’s multiple endings on stage isn’t as simple as just switching out reels of film.

“There are eight possible murderers,” said Salisbury, “each with his or her own confession. And each with a musical reprise based on melodic material sung by the character earlier but with new lyrics. Then there are four choices of who the detective is, with each of those actors learning new lyrics.”

“Once those are revealed, the chairman—the emcee—tells the audience that there should be a little romance to end the show. So the audience picks the couple, who reprise a duet with each possible pair performing a unique sketch. Of course, the murderer isn’t allowed to be the detective or one of the lovers, so that cuts down on choices.” 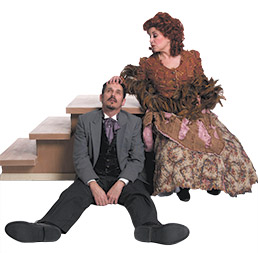 Salisbury isn’t sure of the math, but says that makes “around 400 possible variations.” He said the rehearsal for those scenes felt like speed dating, with each member of the 11-person cast simultaneously practicing with one actor, then switching to the next possible partner.

The actual voting—including actors heading into the audience to campaign—also requires rehearsal. Once the lobbying is done, audience members are instructed to rip out the name of their choice from a sheet of paper and drop it in a basket. The tabulation happens backstage while two numbers are being sung and must be completed in time for the band to know which confession to play.

“Most of the time, the actors will have a minute to prepare because they are backstage,” Salisbury said. “Unless it’s Miss Puffer, who is on stage singing a ballad.”

As to what it’s like for the actors, well, in the spirit of “Drood,” here are three possible ending quotes for this article, from three of the cast members.

A. “You can’t have any fear as an actor in this,” said Cynthia Collins, who plays the title character. “The relationship between the audience and actors is really what makes the show. You have to make them feel comfortable and they have to love you … or love to hate you.”

B. “When we get to the part of the show when the audience votes, my pulse quickens—a lot,” said Paul Hansen, cast as Bazzard. “The additional songs are crazy fun to sing when I’m chosen, but staying on top of all those lyrics is tricky.”

C. “It’s vital that the company builds a solid relationship with the audience, so that they feel comfortable enough to participate,” said Eric Olson, who plays John Jasper. “We have to stay sharp, throughout the entire run. If, at the final performance, the audience votes for an outcome that has not yet been chosen, we owe it to them to present as polished and entertaining a story as if we had been performing that version every night.”•