PK Partners’ fingerprints are all over the upscale Keystone at the Crossing retail district—from The Fashion Mall at Keystone to a recently built $100 million mixed-use development constructed on one of the last available parcels there.

The local company’s latest project, made public last month, is to demolish the former Champps restaurant building that it owns and partner with Duke Realty Corp. to construct a new headquarters for the publicly traded company.

After that, who knows?

“I feel good about what we’ve done at the Crossing,” PK Partners President Philip Larman said. “There are always other opportunities that come around, so it’s certainly not the end of my career.”

Excuse Larman, 59, for sounding a bit sentimental. He’s spent the past 25 years building the area into a vibrant mix of office and retail space buttressed by hotels and apartment complexes.

But he couldn’t have done it without his father, Leonard L. Larman, who nearly 50 years ago had the vision to assemble nearly 200 acres of farmland now bounded by East 86th Street to the south, Interstate 465 to the north, Keystone Avenue to the west and the White River to the east.

The elder Larman in the mid-1970s developed the first phase of The Fashion Mall and the quirkily designed Bazaar shopping center before Phil joined his father’s retail development company in 1981.

MORE FROM IBJ
See which buildings PK Partners has touched at Keystone at the Crossing.

“Leonard had the foresight to put the ground together, but it was Phil who made [the area] what it is today,” said Connie Niessink, a principal at Niessink Commercial Real Estate, which is based at Keystone at the Crossing.

“He has been careful with it, because that real estate is such a valuable commodity. He’s taken his time and has done such a fantastic job and has developed every piece of it.”

Indeed, PK Partners has been involved in the development of roughly 20 buildings, ranging from the River Crossing at Keystone apartments to the Shops at River Crossing to its latest project—River North at Keystone.

Birth of The Fashion Mall

PK Partners moved its office last year from one of the three office buildings it developed at River Crossing to the new River North. The company shoehorned two office buildings, an apartment complex and a Hampton Inn into an area widely considered already built out.

The project has been wildly successful. The four-story, 102,000-square-foot office building that PK Partners built with the Gene B. Glick Co. is fully occupied. Another, Walker Place at River North, is 97 percent leased, and the 196-unit Quarry at River North luxury apartment complex is 90 percent leased. 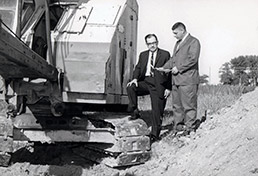 Larman, sitting in an office conference room overlooking the River Crossing lake, recounts how he and his father developed Keystone at the Crossing into what it is today.

The story begins the year Phil Larman was born, 1959, when his father took a job with Albert Frankel, an early retail developer who built Indianapolis’ Eastgate and Southern Plaza shopping centers.

Interestingly, the job opening the elder Larman filled at Frankel’s firm was created by the departure of Mel Simon, who, along with his brother Herb, would launch what would become the biggest shopping mall developer in the world.

Larman and Frankel together began acquiring from farmers the land at Keystone at the Crossing, before Interstate 465 was even built, with plans to build a large mall. 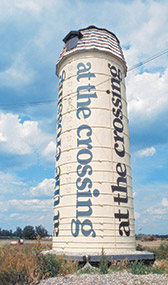 The original signage took advantage of an old farm silo on the property. (Photo courtesy of PK Partners)

Modern shopping malls were still in their infancy and becoming hot. The pair’s plans were to build the Indianapolis area’s first large shopping center, but they were beaten to the punch by mall magnate Edward J. DeBartolo Sr., who broke ground in 1970 on Castleton Square Mall.

Watch a historical promotional video about The Fashion Mall and the Bazaar.

It was then that Leonard Larman decided to break from the aging Frankel and start his own firm. He departed with the rights to the Keystone at the Crossing land and with a new plan to build a mall, this one focusing on the luxury end of the market.

He partnered with the former Indiana National Bank to build The Fashion Mall—which initially was a mere 60,000 square feet—and the accompanying Bazaar. Both opened in 1974.

A TGI Friday’s restaurant, now sandwiched between P.F. Chang’s and Maggiano’s along East 86th Street, originally was located where Crate and Barrel now sits and was quite the happening place, Larman recalled.

“It was a coup at that time,” he said. “It was only their sixth one in the country, and it was probably the most successful restaurant in Indianapolis for a long time.”

But leasing got off to a slow start after the Organization of Petroleum Exporting Countries launched an embargo that caused oil prices to skyrocket, crippling the economy.

Around the same time, Indiana National became immersed in shaky real estate deals around the Midwest. The Federal Reserve stepped in and forced the bank to pull back, which left Leonard Larman without financial backing.

With his bank partner sidelined, Larman in 1978 lost ownership of The Fashion Mall and Bazaar. While those went to Duke, Larman was able to keep the land to the east—what is now River Crossing.

Duke razed the Bazaar in 1986 to make way for a mall expansion that took it to 600,000 square feet. Duke later sold the mall to a British pension fund, which sold it to Indianapolis-based Simon Property Group Inc. in 1997. Simon since has taken the mall to 710,000 square feet.

“The stores were on five different levels, but the building was 2-1/2 stories tall, so there was a lot of walking around, which was the original intent,” he said. “But it was complicated to delineate between the different retailers.”

Phil went to work for his father in 1981 after graduating from Tulane University and turning down a job offer from a developer in New Orleans.

He soon regretted the decision. The loss of The Fashion Mall and Bazaar became too much for his father to bear.

“I loved him, but I couldn’t stand working for him,” he said. “It was clear to me that he wasn’t going to be doing any more development.”

So, the younger Larman left in 1984 to start a custom-home building business, which built in Carmel, Zionsville and the Geist area.

In 1989, though, his father became terminally ill with a brain tumor and died the following year at the age of 70. His business at the time had dwindled to a few older, struggling retail properties.

Larman, along with his sister Karen, a silent owner, bought the remaining assets and founded PK Partners. She remained an owner until Larman bought her out a few years ago.

Upon taking control of his father’s company, Larman set out to get the 85-acre River Crossing property zoned for commercial and residential development.

He accomplished that in 1993. That same year, he sold off a parcel to a North Carolina developer that built the River Crossing apartments. The complex now is owned by locally based Barrett & Stokely Inc.

“That center at the time set a new bar,” said Wes Podell, 34, the company’s first vice president. “It was a higher-quality offering.”

Also in 1995, the company constructed the building that housed Champps—a staple of the Keystone at the Crossing dining and nightlife scene before it closed last November.

CBRE retail broker Steve Delaney—who represented both PK Partners and Champps when Champps signed its lease—said that was his first of several experiences working with Larman.

“I have found them, or him, to be one of the best developers in the city to work with,” Delaney said. “His projects are innovative; he always builds a first-class building.”

PK Partners then set its sights on developing the River Crossing I, II and III office buildings. The company sold the 203,000-square-foot River Crossing I and II—which collectively have 203,000 square feet—to Massachusetts-based Franklin Street Properties Corp. in 2005 for $41.6 million, or $203 per square foot. The price set a high-water mark for Class A multitenant office space in the Indianapolis market.

The 47,000-square-foot River Crossing III opened in 2007. PK Partners called the building home until it moved to its new River North office building.

The company also sold the land on which the Indianapolis Marriott North Hotel was built in 1998.

PK Partners has turned the building into a mix of office and retail, attracting such tenants as Ocean Prime, Diamonds Direct and Dottie Couture. It was through that purchase that Larman met Podell, who was working for Duke at the time. He joined PK in 2013.

Oddly, there is no Four River Crossing. PK Partners opted instead for Walker Place at River North—named for tenant Walker Information—as the name of one of two office buildings in the new River North mixed-use development. The other, which PK Partners calls home, is simply called 8801 at River North.

The portfolio PK currently holds includes $200 million in development. Even so, the firm has just seven employees.

Looking back through all the activity, Larman recalls his father’s role with pride. He called the elder Larman a “visionary and dreamer.”

“There’s maybe not a property that’s been so important to the city of Indianapolis as Keystone at the Crossing,” he said.•