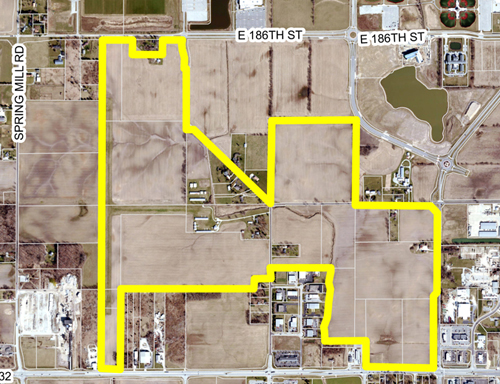 A family that has owned farmland in Westfield since the mid-1800s has requested a rezoning for a massive multi-use development project that would almost rival Grand Park Sports Campus in size.

Wheeler Farms LLC is asking the City of Westfield to rezone 321 acres of land owned by the family at the northwest corner of State Road 32 and Wheeler Road to create the Wheeler Landing Planned Unit Development District. The request would change land now approved for agricultural and single-family rural development into property zoned for a wide range of uses, including apartments, light industrial, educational, retail, warehousing and distribution.

About 10 acres of the land would be used for the proposed $35 million YMCA branch and natatorium announced last week by Westfield Washington Schools. The YMCA would be built at the southwest corner of 181st Street and Wheeler Road south of the 400-acre Grand Park Sports Campus.

The Wheeler family, which owns the nearby Westfield Airport, would donate the land for the YMCA project, according to the YMCA of Greater Indianapolis. 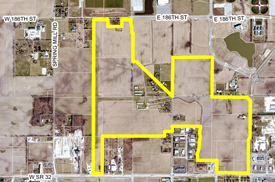 The Westfield Advisory Plan Commission is expected to take up the zoning request in June. The city council would make the final decision on the request. (Click on image at right for a larger view of a map of the property.)

The Wheeler family has declined to discuss exact plans or a timetable for the property, but public filings made with the request are fairly revealing. The acreage would be divided into four areas to allow for multiple uses.

— In Area I, which encompasses about 27 acres along Wheeler Road, the district would allow for multifamily dwellings, an assisted living facility, a nursing home, a hospice facility, a bed-and-breakfast, educational institutions with dormitory accommodations, agriculture and parks. Area I is where the YMCA would be located.

—  In Area II, about 9 acres at the northwest corner of State Road 32 and Wheeler Road, the district would allow for agriculture and parks.

— Area III, about 96 acres in the center of the development and near Grand Park Boulevard, would allow for all the same uses as Area I and a gasoline service station.

— Area IV, nearly 200 acres on the property’s west side, would allow for engineering, research and testing laboratories, retail special handling, a veterinary hospital for large animals, a kennel, light and medium industrial, a self-storage facility, warehousing and distributions operations, wholesalers, educational institutions with dormitory accommodations, wireless communications facilities and an airport. This area would also allow for agricultural use and parks.

Matt Skelton, the city’s economic development leader, said no specifics about what businesses might be coming to the area have been shared with the city. He expects more details will become available if the city approves the rezoning request.

“I think it’s going to be a really unique place,” he said.

Attorney Eric Douthit of law firm Church, Church, Hittle and Antrim, who represents Wheeler Farms, said the family did not wish to discuss the development until the rezoning request was decided.