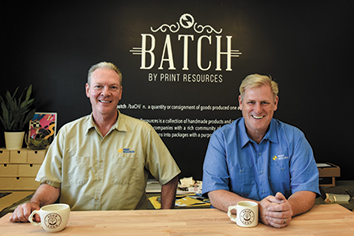 Highs and lows: In their 18 years in business, Print Resources co-owners Tim Browning and Kurt Ellinger have experienced ups and downs. Their printing/marketing company started strong—it made the Fast 25 in 2005—but also went through a period in 2009-2010 when the principals thought every day might be their last. “It’s been rewarding the last few years to see the growth,” Ellinger said.

Making the switch: Part of Print Resources’ success is due to adaptability, Ellinger said. It started as a printing company, then evolved into more of a marketing-products business. “We do as many shirts and hats and marketing kits as we print brochures,” he said. The company put those together in what are called “dimensional direct mailers.”

For example: Browning said a “huge area of growth” has been in putting together kits of marketing material that might include something physical like a battery charger for your phone accompanied by printed material. The company did that for Salesforce—its biggest client—and it worked well, he said. “They find people respond very well to that,” Browning said. “You’re much more likely to take a sales call the day after you get that in the mail than if they just cold-call you or send a postcard.”

Listening to employees: Browning and Ellinger said they believe in being flexible. So when one of their employees, Chelsea van der Meer, came to them with an idea for locally crafted products that could be customized with logos, they worked together to create a division called Batch (batchindy.com).

Easygoing: Browning said Print Resources has never had a budget or specific sales goals. “We’re the opposite of everything you’d read about as far as management and managing the workflow and sales numbers,” he said. “But that has allowed us to be very flexible. So if the next opportunity was to deliver blue doughnuts to Salesforce on the 13th floor of the Salesforce Tower, we would do that for them because they’re our client. We’re very open to new opportunities.”•