Five high-profile deal makers have come together to launch an Indianapolis-based private equity firm focused on buying companies that normally fly under the radar of big investment operations.

Monument MicroCap Partners LLC recently opened an office at Keystone at the Crossing just off Interstate 465, and is exploring its first acquisitions.

Scolnik will serve as MMP’s chairman and managing partner and Erwin will handle day-to-day leadership as CEO.

“You couldn’t assemble a finer group of individuals to do what they’re doing,” said Jeff Wood, senior partner with HKW. “I can’t imagine there’s a microcap private equity firm anywhere that has the experience these guys bring to the table.”

Scolnik insisted his new firm won’t compete with his former employer. Most private equity firms, including HKW, are focused on companies with EBITDA—earnings before interest, taxes, depreciation and amortization—above $5 million.

MMP wants to acquire U.S. and Canadian companies with EBITDA of $1 million to $5 million.

“We felt like the micro-cap market was underserved by private equity firms,” said Scolnik, who has more than 40 years of private equity investing experience and transitioned HKW from an independent/fundless sponsor to a private equity firm with four committed institutional funds totaling nearly $600 million of invested capital.

“There are not a lot of private equity firms that want to deal with these size of companies,” Scolnik said. “The bigger the fund, the bigger the fee. That drives the entire industry to bigger deals.”

Rather than raising a fund, as most private equity firms do, MMP plans to rely on the financial resources of its five partners—along with money from "partners and close associates"—to fund deals, Scolnik said.

“We don’t have any concerns about raising the money. None,” he said. “The hard part is finding companies at a reasonable price.”

MMP expects to evaluate up to 300 small to medium-size companies annually, with the goal of acquiring a majority share in two to four of them. MMP officials said, for starters, they’re prepared to hold majority ownership in up to 10 companies. In three to four years, the partners said, they might increase the portfolio size.

“That’s down the line,” Scolnik said.

Given the size of companies MMP is targeting, he said, the firm expects to pay five to eight times EBITDA, which means the acquisition deals would be in the $5 million to $40 million range.

MMP will be “opportunistic” investors, less concerned with investing in certain sectors than most private equity firms, Scolnik said. But he added that his firm will be interested in health care companies not subject to Medicare reimbursement, “unique manufacturing opportunities,” infrastructure firms, and business-to-business companies offering “differentiated business services,” including firms in the internet of things and software-as-a-service segments.

“We believe these are sectors that will grow faster than the GDP,” he said.

Matthew Neff, a senior adviser for Cleveland-based Evolution Capital and of counsel to the law firm Bingham Greenebaum & Doll LLP, said “there is definitely a market opportunity in acquiring smaller companies.”

The hitch, Neff added, is that dealing with companies with lower EBITDA “requires more work.”

“You’re not just clipping coupons. An investor has to be willing to get in the trenches and work. [A smaller company’s] systems and personnel aren’t as advanced or sophisticated,” Neff said. “They don’t have as much sales and marketing resources. A lot of it has to do with scale, and it takes some time and energy to build that.”

But Neff said he thinks MMP has the manpower to handle the heavy lifting.

“This firm brings in substantial experience and resources,” he said.

MMP is, indeed, looking for companies the five partners can help develop—but not firms that are desperate.

Instead, Erwin said, MMP is looking for companies that have proven a demand for what they make or provide, but simply need more resources and knowledge to grow. 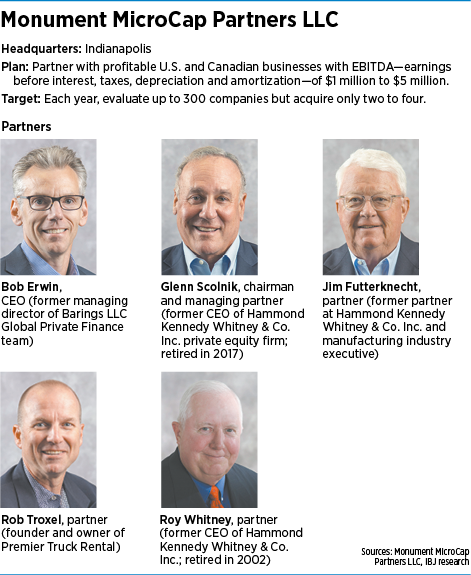 There is no shortage of companies for sale, thanks in part to an aging generation of business owners ready to cash out as well as a desire among many firms to bring in wealthier investors with more resources. But the booming economy means many investors are flush with cash, which has ratcheted up prices for profitable companies.

“We are very disciplined buyers,” Scolnik said. “One advantage of not having a fund is, you don’t have to invest a certain amount each year. In any given year, we could do one deal, we could do four. We won’t turn down a good deal.”

But the five partners are not just committed to investing money.

Erwin emphasized that MMP is not looking to replace current management and, in fact, will encourage company leaders to stay invested.

“We’re not looking to get involved in the day-to-day operations,” Scolnik said. “We’re not going to put our people in or tell the CEO how to price their product. That’s not who we are.

“We want to empower the management team and help them devise a growth plan,” he added. “What we really like is to partner with a management team that maintains an ownership stake with us. That shows commitment.”

MMP also plans to be flexible about how long it holds on to a company. While a typical private equity firm looks to buy and sell its companies in four to six years, Erwin predicted that MMP will keep its acquisitions—and work to grow them—a year or two longer than that.

“We will bring a common-sense business approach,” he said. “A lot depends on the outlook of the business.”

If the economy remains strong, MMP shouldn’t have difficulty finding buyers for the companies it pushes above $5 million in EBITDA. Scolnik said a 20 percent return on investment isn’t an unreasonable goal.

The first order of business for MMP is “getting its name out,” Erwin said. “That’s a lot of hard work. We’re already constructing a database and are starting to make calls.”•