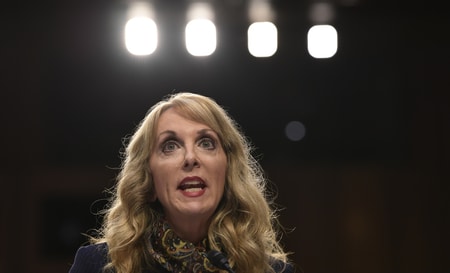 USA Gymnastics CEO Kerry Perry has been forced to resign amid withering criticism that the Indianapolis-based organization has failed to take strong enough steps to respond to the Larry Nassar sex-abuse scandal.

On Friday, Sarah Hirshland, the newly appointed CEO of the U.S. Olympic Committee, sent out a statement calling for a shakeup of USA Gymnastics' leadership. Hirshland's call came hours after the organization awkwardly fired the coach it had hired only three days earlier as its elite program coordinator.

The coach, Mary Lee Tracy, was an early supporter of Nassar when allegations against the former doctor began to surface. After her hiring, without permission Tracy reached out to one of her fiercest critics, gold-medalist Aly Raisman, who is suing USA Gymnastics.

"As we close the day, I'm afraid I can offer nothing but disappointment," Hirshland said in her statement. "Under the circumstances, we feel that the organization is struggling to manage its obligations effectively and it is time to consider making adjustments in the leadership."

Since taking over as part of a USOC-directed revamping of the organization's leadership, Perry has made very few public statements, and has had trouble gathering support in the gymnastics community.

Three weekends ago at national championships, Olympic gold medalist Simone Biles, a Nassar abuse victim herself, withheld judgment on the path USA Gymnastics has taken, saying "nobody can know until Kerry Perry speaks up. It's kind of hard."

Perry did speak up later that weekend, saying all but a few of the 70 recommendations suggested by an independent review of the organization's actions had been implemented.

Golz added: "In the wake of horrific events that have impacted our athletes and the entire gymnastics community, USA Gymnastics has made progress stabilizing itself and setting a new path to ensure that the safety and interests of our athletes remains at the heart of our mission."

Many of the steps USA Gymnastics has taken to regain its footing have been overshadowed by a steady stream of new allegations against Nassar and missteps by the organization.

Tracy's hiring certainly had the look of an unforced error.

She was on record as having supported Nassar in 2016, when allegations began surfacing.

As soon as Tracy was hired, Raisman, who has emerged as one of USA Gymnastics' most vocal critics, called it "a slap in the face for survivors, and further proof that nothing at USAG has changed."

Shortly after that, Tracy reached out to Raisman to apologize and talk about the future.

But USA Gymnastics didn't approve of that. It released a statement Friday afternoon saying that Tracy had inappropriately contacted the gymnast, and that it had asked for Tracy's resignation.

The call by Hirshland for changes at USA Gymnastics came as the USOC itself is under the microscope for its own handling of sex-abuse allegations.

She took over for Scott Blackmun, who resigned as CEO in February due to health problems, while calls for his ouster were increasing for what critics said was the USOC's own slow reaction and unwillingness to take responsibility for abuse in Olympic sports.

A management committee that includes Golz, vice chair and secretary David Rudd and board member Kathryn Carson will oversee the day-to-day operations of the organization during the search for an interim president.

How much impact Perry had on that progress is uncertain. USA Gymnastics was already in the process of implementing the more than 70 changes recommended by a former federal prosecutor when Perry was hired last November, a process that remains ongoing.

The significant moves that Perry did orchestrate came only after external pressure.

USA Gymnastics exited its agreement to purchase the Karolyi Ranch outside Huntsville, Texas, in January only after reigning Olympic champion Simone Biles said she was victimized by Nassar and questioned why she had to train in the same facility where she and others were abused. USA Gymnastics also removed the board of directors in January, a decision it reached only after the USOC threatened the organization with decertification.

Perry kept a low profile during her brief tenure. While she made an attempt to visit member gyms, she made very few public statements and offered little vision for the organization. Biles took Perry to task last month when she suggested it was time for Perry to speak up.

"It's her job," Biles said before winning her fifth U.S. championships.