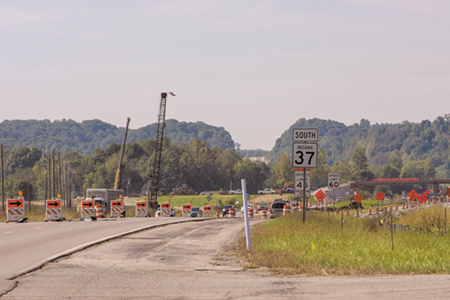 Indiana Gov. Eric Holcomb plans to pursue more than $1 billion in infrastructure projects that would be funded by a 35 percent increase in toll road fees for heavy vehicles.

Most of the projects would be funded by an increase in toll road fees for Class 3 vehicles and above, which includes most large trucks, trucks with trailers, and semitrailers. Passenger vehicles will not be affected by the increase.

A majority of the funding—$600 million—would go toward speeding up work on the last portion of the Interstate 69 project. Section 6 of the project, which runs from Martinsville to Indianapolis, would be completed three years earlier than expected, in 2024 instead of 2027.

Another $190 million would be spent on improvements to U.S. 20, U.S. 30 and U.S. 31. The interchange projects along U.S. 31 would reduce the number of stoplights to two along the roadway from Indianapolis to South Bend.

The Indiana Finance Authority is expected to amend its agreement with the Indiana Toll Road Concession Co. at its Sept. 20 meeting to allow for the increase.

The plan does not require legislative approval.

Also, as part of the amended agreement, the Indiana Toll Road Concession Co. would invest an additional $50 million in upgrades to the toll road, which would bring its total investment in the roadway to $500 million by 2025.

Several other projects included in the Next Level Connections announcement that are not expected to be funded through the toll road proceeds include increased spending on highway cleanup, pursuing a fourth water port in Lawrenceburg, and expanding rail service in northwestern Indiana.•