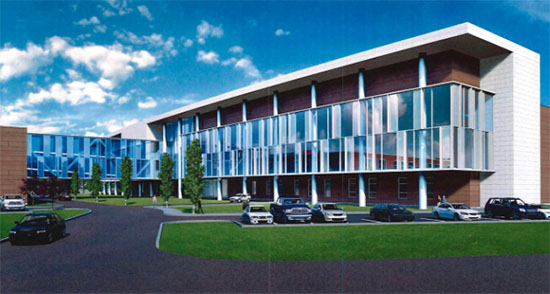 Franciscan Health wants to build an orthopedic hospital and medical office building in Carmel, a project costing at least $130 million, to help it meet the growing demand for hip and knee replacements.

The health system, based in Mishawaka, has filed documents with Carmel outlining the project and asking for a rezoning for part of the site.

The project would span 255,000 square feet across 18 acres along the east side of North Illinois Street, between W. 106th Street and W. 111th Street.

The hospital would employ 432 people, with average salary and benefits of $88,742, the health system said in a 59-page filing.

That’s about seven times as many people as work in another Franciscan hospital about a mile north, Franciscan Health Carmel, at 12188 N. Meridian St.

The health system is asking Carmel to rezone about six acres on the northern part of the site from single-family, low-density residential to the Meridian Corridor District, which allows mixed-use development.

The southern part of the site is already zoned in the Meridian Corridor District.

Franciscan wants to develop the project in two phases. The first phase would be a 135,000-square-foot, four-story orthopedic hospital and a parking garage. A sky bridge would connect the two structures.

The second phase would include a two-story, 120,000-square-foot medical office building, with retail on the first level.

The health system is calling the project the Franciscan Health Orthopedic Center of Excellence.

The proposed site is now undeveloped but is bordered on several sides by neighborhoods with single-family houses.

Meridian Street is one block east.

The new hospital would offer both inpatient and outpatient services.

“Franciscan’s goal is to build an orthopedic center in Carmel, Indiana, that will be recognized as a comprehensive model of care and known for treating patients along the spectrum of orthopedic conditions, ranging from the most common to the most complex,” the health system said in its filing.

The Carmel Plan Commission will hold a public hearing on the proposal at 6 p.m. on Sept. 18 in City Council chambers.