The owners of two industrial properties that span an entire city block along the Central Canal downtown have put their
properties up for sale with an eye toward redevelopment.

The properties, totaling about three acres, together
represent the largest remaining redevelopment tract along the improved portion of the canal. The original structures were
built in 1965 and 1975, next to what was then an unsightly drainage ditch, so neither does much to engage the now-popular
pedestrian walkway.

Locally based Acorn Group Inc. has listed a 52,000-square-foot warehouse currently occupied
by locally based Kirkbride Bible Co. on 1.2 acres at 335 W. Ninth St., with an asking price of $3.8 million. Hokanson Cos.
Inc. is marketing the 18,000-square-foot former home of baking products distributor B.H. Gardner Co. Inc. on two acres at
350 W. St. Clair St., for an undisclosed price.

The owner of the larger building is a company controlled by J.
Marshall Gage of Indianapolis; his son Michael is president of Kirkbride, a 13-employee shop that publishes the Thompson Bible.
It moved into the building in 1984.

The family believes the property’s best use is something other than
its current use, Michael Gage said. He already is looking for a new site for the business and said a potential buyer is considering
a contract to buy both the Kirkbride and Gardner properties.

Ideally, a redevelopment would include a mix of
retail, office and residential, said Al Donato III, a broker with Acorn Group who has the listing.

“This
is the last block that is undeveloped on the canal,” he said. “They first put it on the market a few years ago
but they’re willing to wait it out and see

how it goes. If it becomes a larger project, we can try
to work a deal together (with the property to the south).”

The B.H. Gardner property, owned by the Gardner
Family Trust, hit the market a few weeks ago. Listing broker Stephen Adams did not respond to repeated phone messages, and
others at Hokanson said they did not have any details on the listing. The building appears to be vacant, and the company’s
phone lines have been disconnected.

The Kirkbride parcel most recently appraised for tax purposes at about $1
million, and the Gardner property appraised at about $550,000.

The most feasible use of the parcels is for apartments
or for an expansion of an existing campus of buildings serving Clarian Health and Indiana University, real estate brokers
said. Across the water, the Canal Court apartments sprawl over a couple of blocks, and a few blocks to the south, the massive
200-unit Cosmopolitan on the Canal apartment and retail building is set to open this fall.

Building a mixed-use
project like the Cosmopolitan would be tough in the current environment, said Dennis Dye, vice president of development for
locally based Browning Investments Inc. The challenge with retail is that St. Clair Street and Senate Avenue isn’t exactly
“Main and Main,” he said. And condos—a “dirty word” these days—are pretty much impossible
to finance. 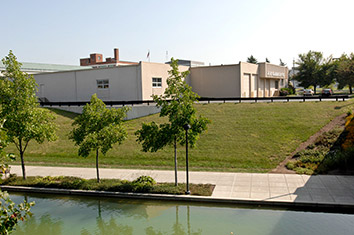 Any redevelopment should seize the opportunity to redefine
what is now a strong suburban vibe in that section of the canal, said Aaron Renn, who writes the popular urban-planning blog
The Urbanophile. Much of the residential space in the area is surrounded by gates, and the existing offices and their private
parking lots are pretty much dead outside normal business hours.

“The canal has essentially become an office
park entity not too unlike the fountains and lakes in the suburbs,” Renn said. “We don’t need to be building
gated subdivisions along the canal. We spent millions producing this urban amenity and put suburban office complexes around
it.”

He sees the Cosmopolitan by locally based Flaherty & Collins Properties as proof the tide is turning
toward a more urban feel. For the block north of St. Clair Street, Renn would like to see either dense residential without
a city subsidy, or a small city subsidy to allow for a mix of residential and commercial.

“It should engage
the neighborhood around it,” he said.•