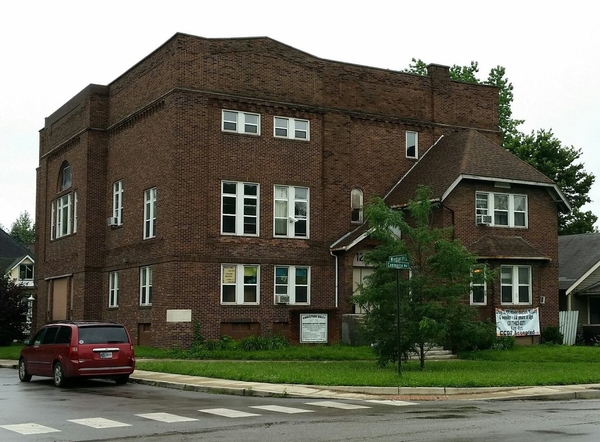 The Battista family’s proposal to redevelop a Prohibition-era church building on the east side of Indianapolis into an independent cinema and eatery has changed dramatically, with the plan now calling for a demolition rather than a renovation of the aging structure.

Father-and-son team Tom and Ed Battista and business partner and film enthusiast Sam Sutphin won approval from the Metropolitan Development Commission on Wednesday to knock down the old Christian Unity Missionary Baptist Church at 1258 Windsor St. and start a new facility from scratch. The existing 14,000-square-foot prominent brick structure at the corner of Windsor and Commerce Avenue dates to 1924.

Ed Battista told IBJ that the initial plans to convert the church turned out to be untenable once construction experts got a serious look at the structure, which was in much worse shape than expected.

The changes will escalate the expected cost of the project to between $4 million and $6 million, more than double what the team initially expected to spend.

“We spent a good six months of our time and a lot of money on consultants and engineers to try to bring our original plan to fruition, but we didn’t [initially] realize the foundations of the building were as inadequate as they were,” Battista told IBJ. “You kind of go in with an idea of what you think you can accomplish. The cost outpaced the ability of the project to be viable.”

Battista said the plans for the project, a new art house cinema and restaurant, are essentially the same, but they will now be in a new structure. The site is one block from Spades Park and about a mile east of the Mass Ave district.

Construction on the project, including the razing of the church, will take place as soon as the team gets its permits, hopefully within the next month or so, Battista said. It is anticipated to take about a year to build.

“With the new building, we believe we’re going to be able to sustain those additional costs,” Battista said. “With the old building, it would have been a pretty inefficient operation to run.”

The plan to build from scratch hasn’t been without challenge. The Battistas, who have a history of repurposing old buildings, said they liked the idea of converting the church “because of the cultural fabric behind it.”

“It’s easier to play off the history of something like that, to create that kind of feeling of authenticity,” he said. “We’re working on a plan to create a product that doesn’t feel contrived and feels like authentic Indianapolis and something we can all be proud of.

Battista, whose family also owns the Bluebeard restaurant at 653 Virginia Avenue, said the team is excited to bring a new cultural asset to the neighborhood.

“Our goal is to really to bring art film to Indianapolis in a real substantive way,” Battista said.

The MDC vote on Wednesday was 7-1 in favor of the new building plans.

She said neighbors were increasingly turning against the project.

“A lot of people are alienated by this and don’t even want to try civically anymore [to stop the project],” Siner said.

But others, including those from the Windsor Park Neighborhood Association and the Spades Park branch of the Indianapolis Public Library, spoke in favor of the proposal.

“We are very excited to have a new anchor,” Ehret said. “I love old buildings. The fact is, you can’t save every old building.”