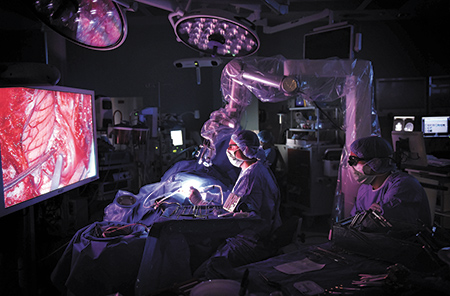 Over nearly a decade, Indiana University Health Physicians has built one of the largest physician networks in the nation—about 1,800 doctors—by acquiring one independent group after another: cardiologists, rheumatologists, ophthalmologists and more.

Now, IU Health Physicians is setting its sights on one of the state’s last independent holdouts, the neurosurgical Goodman Campbell Brain and Spine.

Bringing the Indianapolis-based group of about 50 doctors—including 35 neurosurgeons—into its fold would fill the last big hole in IU Health Physicians’ specialty lineup and give it a formidable boost in the high-prestige brain and spine market.

It could also add another stream of physician referrals to IU Health and give it more heft in dealing with insurers and competitors.

“It’s really an exciting possibility to try to bring them in,” said Dr. David Ingram, president of IU Health Physicians, a joint venture of IU Health hospital system and the IU School of Medicine.

But it won’t be a slam dunk. Eight-year-old Goodman Campbell has a proud history of independence and says it has no plans of giving that up. Goodman Campbell neurosurgeons practice in multiple hospitals, and say they are concerned that, if they joined IU Health Physicians, they would be limited to its hospitals.

“Our goal is to continue to be independent,” said John Moeller, the group’s executive director of operations.

Some observers say Goodman Campbell has a strong hand, because its physicians are in demand by all health systems in the area.

“All folks want to have them due to their very high quality,” said Ed Abel, director of health care practice at Indianapolis-based Blue & Co., an accounting and consulting firm. “But Goodman Campbell likes being able to go from Indiana University Health to St. Vincent to St. Francis to Community, because it is good for them and their independence.”

So from IU Health’s perspective, bringing the neurosurgeons from Goodman Campbell into its practice would represent a crowning touch to a decade-long strategy of building a multi-specialty practice.

But it also would represent the latest step in consolidation that is sweeping medicine and turning physicians into hospital employees at a dizzying pace.

In 2000, 57 percent of the nation’s physicians were independent, according to Accenture, a global management consulting firm. But that figure had fallen to just 32 percent in 2016.

The two concerns physicians cited most about remaining independent were reimbursement pressures and overhead costs, according to an Accenture survey.

It’s hard for many of the independent physicians to compete against huge health systems, which have economies of scale and competitive contracts with insurers, said Kristin Ficery, managing director of Accenture’s provider business in Atlanta.

In addition, many younger Americans no longer even have a primary care physician. Instead, they visit a walk-in clinic or urgent-care center when they have medical problems, from ear infections to serious fevers, she said.

For the past nine years, the neurosurgeons and IU Health Physicians have been working together through an agreement under which Goodman Campbell physicians perform a wide variety of brain and spine surgeries at all of IU Health’s neurosurgery departments across the state.

But the agreement expires in December 2019, and both sides are in early talks on how to proceed.

IU Health Physicians says its goal is to have Goodman Campbell under its umbrella as employees. Already, it is laying its expectations on the table and using language that strongly states its desired outcome.

Ingram said he is not interested in having the relationship continue as is but wants it to evolve a model of physician-employees that IU Health Physicians has successfully built for nearly a decade through acquisitions.

“Our goal and our plan, which we’ve always stated, is to have our IU Health neurosurgery group in place by January 2020,” Ingram said. “So at this point, I would say we’re in transition.”

IU Health Physicians formed in 2009 as the Indiana Clinic, and grew over the years by acquiring about 65 specialty practices. Like many other physician groups formed by large health systems, including Mayo Clinic and Cleveland Clinic, its goal is to bring a steady stream of patients into IU Health hospitals and clinics.

But it says another goal is to coordinate care across its system, from treatment protocols and electronic medical records to physician salaries and patient billing. Doing so, it says, improves patient care.

“It’s pretty clear from the evidence in the [medical] literature that the highest quality of care at the lowest cost is delivered in these large group practices that are fully integrated and aligned,” Ingram said.

To no surprise, independent physicians disagree, and say that large physician groups owned by health care systems actually raise the cost of care. That happens because the health system can pile on “facility fees” that can boost the price tag for a doctor visit or a medical procedure from three to 10 times, said Marni Jameson Carey, executive director of the Orlando, Florida-based Association for Independent Doctors.

On top of that, she said, large health systems often require their physicians to refer patients only to other specialists in the system, as well as to hospital-owned imaging centers and surgical centers, and that restricts the access patients have to affordable care and a competitive marketplace.

“Anything outside of that is called leakage, and the doctor gets a severe reprimand and sometimes a pink slip,” she said.

David Blish, director of health care consulting at Katz Sapper & Miller in Indianapolis, said hospitals increasingly want to “lock in” a patient base by employing physicians.

Doctors, for their part, faced with growing expenses and regulations, are often happy to be acquired, he said. That includes newly minted physicians, who often have no interest in managing a practice.

“Younger physicians are less interested in putting up a shingle and would rather be employed,” Blish said.

Whether Goodman Campbell can withstand the market pressures and remain free from outside control remains to be seen. But the group has an independent streak that goes back to its founding.

The group formed in 2010, when the neurosurgeons in the IU medical school’s Department of Neurological Surgery merged with the Indianapolis Neurosurgical Group. At the time, the newly formed IU Health Physicians was already trying to woo specialty groups into its orbit.

“By bringing together these esteemed surgical, scientific and academic resources, we are fulfilling a belief held by the former leaders of these two groups that patients would be best served if the walls between the operating room, the lab and the lecture hall were torn down,” according to a brief history on the Goodman Campbell website.

The group still serves as faculty members of the IU medical school—the only department in the school not staffed by IU Health Physicians.

“It’s unique to have a private practice as your department,” Moeller of Goodman Campbell said with a note of pride in his voice.

The group points to many firsts. Predecessor Indianapolis Neurosurgical Group pushed in 1974 for Methodist Hospital to order Indiana’s first computed tomography scanner, becoming just the 25th hospital in the world to possess this capability. For three years, this was the only CT scanner in Indiana.

Its surgeons also performed Indiana’s first microlumbar discectomy, and were the first in Indiana to clip aneurysms with the microscope. They also introduced radiosurgery for the treatment of brain tumors and vascular malformations, among other achievements.

With that rich history, Goodman Campbell is making no sounds that it is interested in being acquired. It said it is satisfied with the current relationship but will negotiate with IU Health Physicians and see where things go.

“With any negotiation, it gets pretty lively, even a year out,” Moeller said. “I can tell you that Goodman Campbell enjoys this relationship. We’re thrilled with what we’ve built with the residency practice, with the clinical trials, frankly with every aspect of it.”•