Hosting more than 4 million visitors annually at the 250-acre White River State Park (which includes many of the region’s major museums and attractions), Carolene Mays-Medley has overseen a rapidly increasing event lineup as well as an infrastructure overhaul—including an upcoming upgrade of the Lawn concert facility. With an extensive career in politics, business and media, she was named a Sagamore of the Wabash in 2016.

Affiliations: Mays-Medley serves on the boards of One America Financial Services, St. Vincent Hospital Foundation, Federal Bureau of Investigations Citizens Academy, IU Lilly School of Philanthropy Mays Family Institute, and others. A lifetime board member of the Indiana Sports Corp., she was chairwoman of three NCAA Women’s Final Fours.

Rising up: Mays-Medley earned her undergraduate degree in business management from Indiana State University and is working on a master of laws degree from the Indiana University Robert H. McKinney School of Law. She worked at her family’s Mays Chemical Co. during college breaks, plus every-other-day commutes between Indianapolis and Terre Haute her senior year. After graduation, she took a job with Diamond Shamrock Chemical Co. in Dallas and stayed for seven years. “Due to almost being killed in a violent marriage,” she said, “I moved home to work for Mays Chemical Co., which I honestly had always planned to do at some point.” After rising from manager of marketing to taking over national sales, she moved to the Indianapolis Recorder newspaper while also purchasing Indiana Minority Business Magazine and making frequent appearances on local television. She served six years as a member of the Indiana House of Representatives, and then was appointed as a commissioner to the Indiana Utility Regulatory Commission, serving six years before accepting her role at White River State Park.

Turning point: Taking over the Indianapolis Recorder, which “was failing–with approximately $250,000 in debt, low readership, and viewed as one of the worst newspapers in the [National Newspaper Publishers Association]. … The business became profitable in 14 months with no standing debt, subscriptions increased by 50 percent and readership doubled. In addition, the employees were all given a minimum of 50 percent in salary increases … and the paper began winning awards for content and layout. … I learned a lot about myself and my willingness to conquer the challenges with an ability to persevere.” 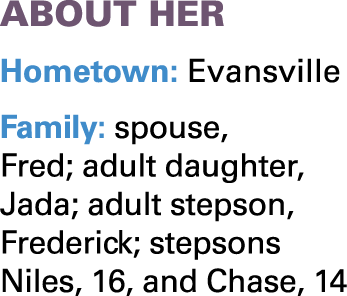 Mentors: Her parents, who worked full time while returning to college to complete undergraduate and master’s degrees. “I’ve been grateful that I have been able to go to them for advice and direction throughout my major life changes.”

Inspiring book: “The Bible by far has had the strongest influence. I also love ‘Draw the Circle’ by Mark Batterson—a great uplifting book about faith.”

Change she’d like to see: “More humbleness and less posturing by leaders in every field I’ve ever worked.”•