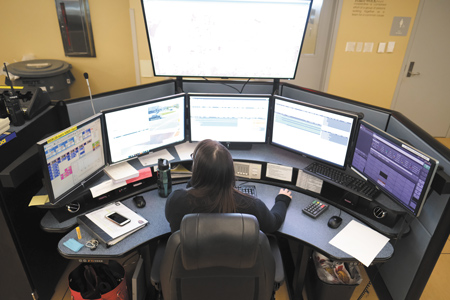 Income taxes in Hamilton County could increase 10 percent under a proposal for funding the county’s 911 center.

For at least a year, county officials have debated how best to pay for the county’s 911 communications operation going forward. Now, some leaders are discussing a 0.1-percentage-point tax increase that would specifically fund emergency dispatch services.

A portion of the department’s budget—$3.6 million—comes from a statewide user fee charged to telephone and mobile phone users. The rest, $5.6 million this year, is currently split among the county and its four largest cities—Carmel, Fishers, Noblesville and Westfield. None of the county’s small towns or township governments have contributed. 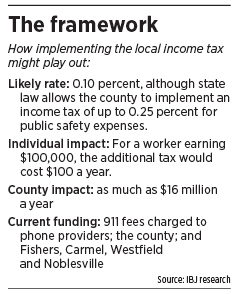 But the cities’ leaders have decided they no longer want to absorb all that expense and have renegotiated interlocal agreements between the cities and the county that will require the towns and townships to start sharing the costs.

In 2019, the cities will pay about $500,000 less to the department, which has a budget of more than $10 million, said Hamilton County Commissioner Christine Altman.

For next year, the small towns and townships will collectively pay about 10 percent of that gap, while the county funds the rest, approximately $440,000. Doing so will allow those communities to phase 911 dispatching costs into their budgets, Altman said.

But some county leaders have proposed an alternative that would provide relief to all: implementing a local income tax increase specifically for public safety expenditures.

The tax could generate enough funding to cover countywide 911 costs, taking the load off the county and the cities and towns, officials said.

But it would mean more money coming out of Hamilton County residents’ paychecks. A 0.1 percent tax would cost a worker earning $100,000 a year an additional $100.

Altman said the tax increase would generate about $16 million a year, more than enough to fund 911 operations and plan for future capital improvement expenses.

So far, talks about raising the local income tax are in the beginning stages, but some county and city leaders believe it’s the answer to funding one of the most important services provided to residents.

In 2008, the state passed a law that limited the number of dispatch centers a county can have to two, forcing counties across the state, including Hamilton, to consolidate 911 operations. Carmel, for example, previously operated its own dispatch center, Carmel Mayor Jim Brainard said.

Since then, interlocal agreements between the county and the various cities have governed how the 911 center is funded. Each city pays a portion of the bill (Fishers, for example, is expected to pay $1.3 million next year, while the county pays $130,000), and the county oversees the operation.

For several years, funding from the telephone user fee ($1 per month per device) and the contributions from the four cities and the county was enough, Altman said.

But over the years, the percentage of the budget funded by the user fee dropped (from 43 percent in 2015 to about 35 percent next year), increasing the balance the cities and county carry.

That—coupled with the renegotiated interlocal agreements—left about $500,000 of the 911 budget for 2019 unfunded, Altman said.

“It put us in a difficult situation,” she said. “We’ve had to talk about, how can we cover the gap?” 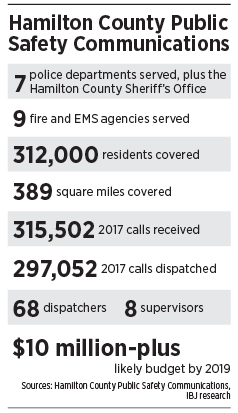 For 2019, the gap will be covered by county funding, but no decisions have been made beyond next year.

The county could ask the smaller communities to pick up more of the bill, but some fear that could strain their budgets, Altman said.

“I think they might be able to contribute more, but I’m just not relying on that,” she said.

The biggest portions of the 911 center’s budget are the employees and the equipment needed to operate the service, she said. “I really don’t think any of this is a luxury.”

County Councilor Fred Glynn said two Hamilton County governmental bodies have authority to implement a public-safety tax: the county council, or the local income tax council—which is made up of representatives from every unit of government that receives local income tax funding.

Implementing the tax through the local income tax council would require one of the county’s fiscal bodies to adopt a resolution to increase the tax. That would trigger a meeting of the council, and members representing at least 50 percent of the county’s population would have to vote in favor of the tax.

Glynn said if the proposal came before the county council, he would likely vote against increasing income taxes to pay for emergency-dispatch services. That's because the county council doesn’t have representation on the 911 center’s executive board. He said that often leaves the council out of the loop on how the agency’s budget is spent.

Among city leaders, opinions about the proposed tax increase are varied.

While presenting Fishers’ 2019 budget in September, Mayor Scott Fadness said the amount the city is set to pay for dispatch services next year would be enough to fund 10 new positions (three firefighters, five police officers and two others) the city is adding to its roster. Instead, Fishers residents will see a slight property tax increase to pay for the new positions and other city initiatives and projects.

Long term, Fadness said, it makes the most sense to have the countywide service funded by a countywide revenue stream.

“The perspective I have on that is [that], if it’s a vital, countywide service—which I think anyone who thinks about the fact that when they’re in an emergent situation, they’d like to be able to call 911 and have someone effectively deal with that issue—then there should be a countywide revenue stream that’s equitably applied to everyone,” he said.

Westfield Mayor Andy Cook said increasing the income tax rate would be politically dangerous for elected officials, which might be why it hasn’t yet happened.

His city would benefit from the tax because it would free up funding in his budget for other important expenditures, he said, as the state’s property tax caps have strained many municipal budgets

“We constantly have to look at what tools our Legislature graciously gives us to best serve our citizens,” he said.

And Brainard said he wants to know more about the impact a tax increase would have on residents before deciding whether it’s a good solution. Because the benefits of the 911 center are shared equally, it would make sense for the cost to operate the service be split equally, he said.

“We always hesitate to raise taxes, but this is public safety,” he said.•