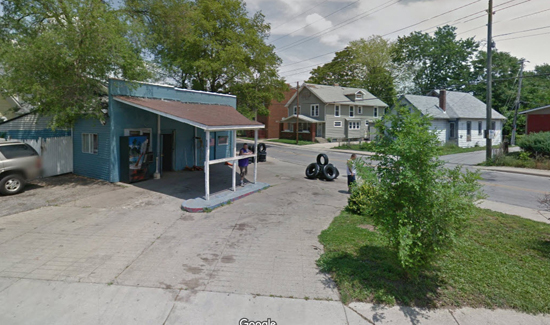 Two townhomes with a modest office or retail component are planned on the former site of an old service station along one of Fountain Square’s main arteries as the neighborhood’s resurgence continues.

Indianapolis-based Keller Girls LLC bought the triangular, 0.10-acre parcel of land at 828 Shelby St. in April for $250,000, according to county assessor’s records. It’s the northwest corner lot at Shelby’s intersection with Elm Street.

On Oct. 17, the Indianapolis Metropolitan Development Commission approved a variance of development rules allowing Keller Girls to build the townhomes, which would include about 2,000 square feet of office or retail space at street level.

One residential unit would boast about 2,000 square feet of space, and the second would have about 2,250 square feet, according to a rough site plan filed with the city.

Questions remain about the design, cost and timeline for the project. Drew Keller, a local real estate agent for Keller Williams Realty Inc. and a partner in Keller Girls, confirmed to IBJ that he was part of the project but didn’t respond to several requests for more information.

The site is about five blocks north of the commercial heart of Fountain Square, but the immediate neighborhood is predominantly single-family residential. The small, shack-like service station that previously occupied the property recently was torn down.

Planning staffers initially took issue with the project’s proposed setback from the street. They also cited the fact much of the area had been rehabilitated in the past 15 years and that all of the surrounding properties were low-density single-family units—rather than townhomes, condominiums or apartments.

The developer worked with members of the planning staff to come up with a solution that would mitigate impact on surrounding homeowners and businesses.

“The revised site plan has addressed staff’s concerns, and limited the impact on the adjoining neighboring properties,” according to a staff report.

The North Square Neighborhood Association was one of at least seven groups and neighboring property owners to send letters of support to the city for the Keller Girls project.

“The structure that existed before has been an eyesore and a safety hazard for quite some time, and we are looking forward to the completion of this new project,” wrote Jeff Carl, president of the North Square Neighborhood Association.

“We also are excited about the prospect of a commercial business on the first floor, assuming their services are beneficial to the neighborhood,” Carl wrote.

If started today, the townhomes would be just one of many construction or rehab projects visible from Shelby Street. Fountain Square is still in full revival mode as food-and-entertainment-related businesses flock to its main drags and homebuyers seek remaining deals for turnarounds in the now-trendy historic area.

It has been featured prominently in the HGTV rehab show “Good Bones,” which recently entered its fourth season.

Fountain Square’s average selling price has risen to $258,000, according to a report earlier this year by real estate analyst Trulia. Some current listings on the site cost as much as $479,000.