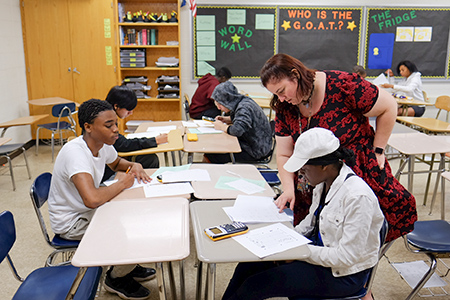 Indiana lawmakers and education advocates are making raises for teachers a priority for the upcoming legislative session.

As top lawmakers—Republicans and Democrats—prepare to craft the next two-year state budget, they have been in talks about how money could be set aside for teachers and other educators. But it’s unclear how much of a pay hike is on the table or how the dollars would get from the state to teacher paychecks.

“The governor’s office and both Republican caucuses are seriously looking at this as an issue,” said Rep. Bob Behning, a Republican who chairs the House Education Committee. “If we’re focused on really making (teaching) more of a profession, you can’t do it by grants here, grants there. People need to see the opportunity.”

While Indiana’s teacher pay has not fallen as dramatically as it has in other states, salaries are down from 2009 when adjusted for inflation. The average teacher salary in 2018 was $54,846, down about 4.5 percent from nine years earlier, according to data from the National Education Association teachers union. An analysis of data from the National Center for Education Statistics and Council of Community and Economic Research ranks Indiana 18th highest in the nation for teacher salaries adjusted for cost of living.

Teacher pay has been central to education policy debates in 2018 across the nation, with teachers in several cities staging walkouts and protests to urge officials in their states to increase funding for classrooms. Indiana teachers have not gone on strike, but the national uproar around funding and teacher compensation has been felt among Hoosier educators—especially as schools across the state struggle to hire enough qualified teachers. In Indianapolis Public Schools, raising teacher pay was the driving motivation behind asking voters to approve a tax increase of $220 million over eight years.

“I don’t think I’ve talked to anyone who said they’re fully staffed in special education,” said Teresa Meredith, president of the Indiana State Teachers Association. “But if you get them and you can’t keep them because they can’t pay bills, and they have no hope of having a family or getting a house … they’re going to look elsewhere.”

It’s too early to know how lawmakers would approach raises logistically for the state’s more than 71,000 public school teachers or how much they’re willing to support, but there does seem to be some initial consensus that the increases should go to base salaries, not just stipends as previous efforts have involved.

“We need to look at how do we make a significant impact to the base for all teachers,” said Sen. Eddie Melton, a Democrat from northwest Indiana. “That’s where we’re going now, to figure out what’s a sustainable method to fund this—not just for one or two years, but ongoing.”

In previous years, the state has set aside a few million dollars at a time for teacher bonuses or stipends for teaching advanced courses or subjects in shortage areas, such as science, math, and special education. The state’s pool for merit pay raises this year for teachers rated effective and highly effective is $30 million, amounting to typically small bumps for teachers.

But a noticeable raise for every teacher in the state would cost many millions of dollars, a considerable undertaking at a time when state revenue has been shrinking and competition among lawmakers and agencies to get a slice of state funding is high.

It’s also unclear if the money for raises would be figured into the state’s school funding formula or as a separate line item. It could be especially complicated because in Indiana, there are no common teacher pay guidelines. Each district or charter school creates its own pay scale, which often involves union negotiations as well.

Lawmakers and advocates alike say they expect this to be a top issue for the legislature. Still, any proposal to increase teacher pay would be competing with other issues—chief among them increasing funding for the Department of Child Services. Earlier this year, the resignation of the agency’s director set off a major review of its staffing and caseload, stretched further by the number of children needing services because of Indiana’s opioid crisis.

Teacher salaries could also square off against other education issues, such as school safety improvements and initiatives to increase class offerings in science and math.

In IPS, district officials have been stressing the need to increase teacher pay. Superintendent Lewis Ferebee said he’s also been having conversations with lawmakers about potential ways that the state could address the problem.

“They appreciate the need to address the teacher shortage, and they understand it’s an issue not only impacting Indianapolis Public Schools but it’s also an issue that’s statewide,” Ferebee told Chalkbeat two weeks ago.

Teacher hiring has continued to be a struggle for districts across the state, a survey from an Indiana State University professor said. Of the 220 districts surveyed, 91 percent said they’d had trouble filling jobs, with special education, science, and math being the hardest to fill.

According to state data, Indiana issued licenses to 4,285 new teachers in 2018, down slightly from 5,016 in 2017 and 4,566 in 2016. A survey conducted by the Indiana Department of Education reported 88 percent of educators who responded were unsatisfied with their pay, and it was the reason most frequently given for leaving the teaching profession.

“Based on conversations with some lawmakers, based on what’s going on across the country, I think our lawmakers have seen there’s reform fatigue,” Meredith said. “Let the dust settle and figure out how we come back and demonstrate respect for teachers.”

In other states where lawmakers have approved statewide teacher pay raises, the process has differed. Oklahoma raised the salary floor for all teachers, with an average increase of $6,100 per year. The state budgeted more than $425 million for the salary increases, which are to be covered by new higher taxes on cigarettes, cigars, and gas. In West Virginia, a nine-day strike ultimately led lawmakers to increase pay for all public employees by 5 percent.

Gov. Eric Holcomb has not yet weighed in on whether he would support a statewide teacher raise, but Behning said he’d been in conversations with the governor’s office. Indiana’s next legislative session begins in January.