As Fishers charges ahead with converting the Nickel Plate Railroad into a pedestrian pathway, the trail through Noblesville doesn’t seem to be gaining that same traction.

It’s been nearly two years since Fishers Mayor Scott Fadness, Noblesville Mayor John Ditslear and the Hamilton County Commissioners stood along the Nickel Plate corridor in Fishers and announced their plans to replace the tracks with a trail that would connect the two communities.

This May, the Federal Surface Transportation Board gave the communities—which own the tracks—permission to railbank the line, which essentially protects the right of way for potential future rail reuse.

Since then, Fishers has hired two firms to oversee the trail’s master planning, lined up financing for the trail’s first phase, and started holding community meetings for residents’ input on trail components.

But Noblesville has no plans to begin building the Nickel Plate Trail in 2019, Ditslear’s last year in office. Work on three other trails already is planned for next year, city spokesman Robert Herrington said.

In fact, the Nickel Plate Trail isn’t included in Noblesville’s capital improvement plan, called Noblesville Now, which includes 10 large, high-impact projects the city will start by 2023. The city unveiled the plan in July.

That leaves development of the trail in the hands of Noblesville’s next mayor.

Already, two candidates running in the Republican primary in May have said that, if elected, they would reconsider the city’s trail plans because they’d like to keep the tracks in place.

Republican Mike Corbett, who ran against Ditslear in 2011 and 2015, said, if he had to choose between a trail and the railroad, he’d pick the railroad. Republican Julia Kozicki, who currently serves on the Noblesville School Board, told IBJ she would research the cost of purchasing additional right of way in order to build a trail alongside the tracks instead of replacing them.

Opponents of the trail have long argued that a rail-with-trail plan is an inclusive compromise, to allow the railroad corridor to remain operational. But current leaders of both cities have said a rail-with-trail concept isn’t feasible because of the cost of purchasing additional right of way needed for the trail and tracks to safely run alongside each other.

Meanwhile, Noblesville City Council President Chris Jensen, who is also running in the Republican primary, said the Nickel Plate Trail isn’t a priority in his campaign. Noblesville has too many other infrastructure projects that need to be completed before planning for that trail begins, he said.

The Nickel Plate Railroad was built through Noblesville in the 1850s. Freight and passenger trains traveled on it for more than a century and passengers included a handful of presidents.

But since the 1980s, the line in Hamilton County has been used exclusively for local excursion trains, including the Indiana State Fair Train, which brought people from Hamilton County to the state fairgrounds for more than 30 years. Another popular excursion train, the Polar Bear Express, operated between Fishers and Noblesville at Christmas time. Both were run by the Indiana Transportation Museum, which was the tracks’ sole operator.

Since the mid-1990s, Fishers and Noblesville have owned the tracks, which run for 37.5 miles between East 38th Street in Indianapolis and Tipton. In 1998, Hamilton County joined the cities as an owner.

When the communities announced their plans in February 2017 to convert the rail line to a trail, opposition sparked almost immediately. More than 4,000 people signed a petition urging leaders to consider leaving the tracks in place; the petition now has more than 8,000 signatures.

Even now, residents and the not-for-profit Save the Nickel Plate are fighting to keep the tracks for potential mass transit or freight operations. Opponents and others have filed lawsuits, filed a petition with the Federal Surface Transportation Board to use the tracks for freight operations, and most recently, filed a petition with the Indiana Department of Local Government Finance to remove funding for the trail from Fishers’ 2019 budget.

A self-described “huge supporter” of trails, Corbett said he can’t support a plan that removes the tracks. And while he’d like to see a rail-with-trail project, he said he’d scrap plans for a trail if doing both became too expensive. There are other places a trail can be built to provide residents with the recreational opportunities current leaders seek, he said. 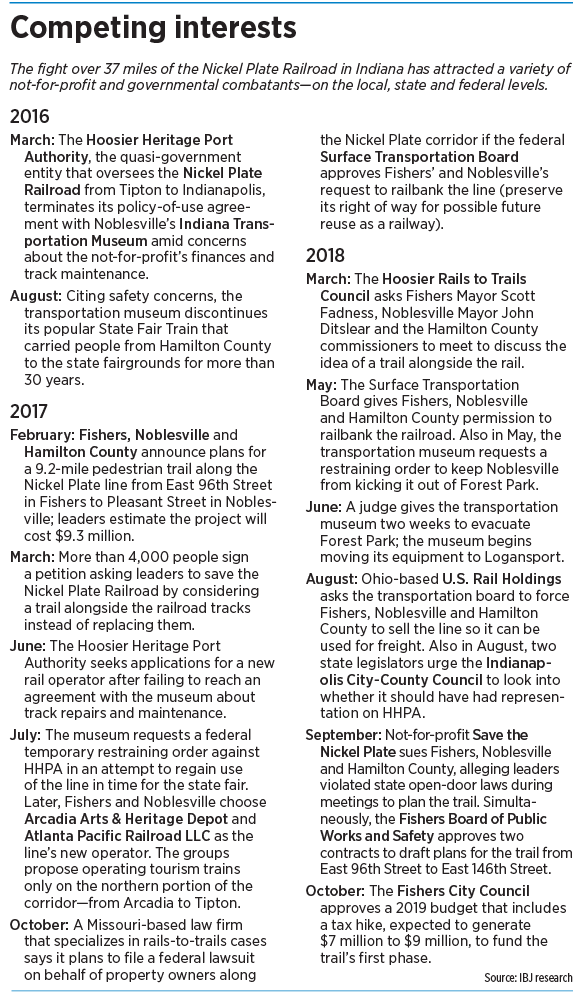 The Indiana Transportation Museum moved its operations to Logansport in July, after the rail line’s owners found a new operator for the tracks. The Nickel Plate Express, which boards in Atlanta and runs for 12 miles to 216th Street in northern Noblesville, is in the midst of its first season operating the Reindeer Ride Express.

“I myself have been walking down Eighth Street when the Polar Bear Express goes by, and it’s priceless,” Corbett said. “That’s a shame. We’ve lost a priceless amenity here.”

Kozicki, who is employed as legal counsel for Sigma Kappa Sorority’s national headquarters in Carmel, said, as a lifelong Noblesville resident, it’s important to her that the city maintain downtown’s historic nature—and that includes the tracks and a train.

As she’s met with Noblesville residents in her bid for the mayoral nomination, Kozicki said she’s learned that the tracks are important to many of them.

“There’s certainly a core of residents in Noblesville for whom this is a concern,” she said.

When she launched her campaign in August, she promised to rescind the city’s decision to disable the Nickel Plate Railroad south of Conner Street, saying it’s not the best decision for long-term economic development.

Maintaining a rail line from Indianapolis to Noblesville is important for economic development and mass transit, if it’s ever to be implemented in the region, she said.

A petition is pending that asks the Federal Surface Transportation Board to force Hamilton County, Noblesville and Fishers to sell the line so it can be used for freight purposes. (The board ruled for the cities on Dec. 21, after this story was published.)

U.S. Rail Holdings filed the petition in August, saying as many as 1,900 car loads of grain could be moved on the line each year. The petition also states that companies with operations along the line have said they could use it for freight purposes.

Both Kozicki and Corbett say, for that reason, the city should not rip out the tracks.

“It would be a huge mistake,” Corbett said. The tracks “have a lot of potential. … It’s invaluable to have that kind of access to the community along the right of way.”

Jensen acknowledged that the tracks’ history and heritage in Noblesville make the debate an emotional one, but said he’s more concerned that the city complete projects it promised residents years ago.

If elected, his focus will be on the State Road 37 project, which will transform the thoroughfare into a freeway from 126th Street to 146th Street; extending Pleasant Street, a plan the city introduced in 1995; and completing the Midland Trace Trail.

“There’s projects that have been dreamed about and announced for decades,” Jensen said. “It’s time to implement. This community is owed some implementation and leadership on that, and that’s what I’m going to stand for.”

Kozicki told IBJ that, while she expects the trail’s future to be debated during the election season, it’s not necessarily the top priority for her, either.

“My priority is to maintain the historic character of our downtown and balancing that with opportunities for growth and development,” she said. The trail debate “is a part of that but not the full focus.”•