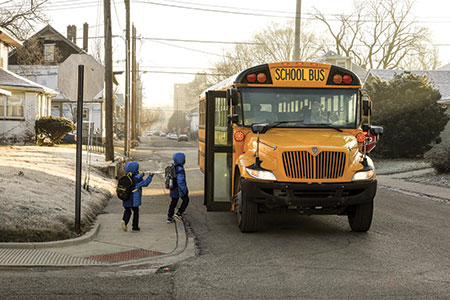 The launch of Synovia Solutions’ new app in 2015 was a bit like running a bus route on the first day of school.

There was a lot of uncertainty about the course it would travel, and no one would have been surprised if things started out rolling slowly or the ride had been a bit bumpy.

But it was a quick acceleration to wide acceptance for Indianapolis-based Synovia’s Here Comes the Bus, an app designed to notify parents and students where their bus is at all times and send alarms to their cell phones or tablets when the bus is close to their home or arriving at school.

Synovia leaders didn’t question whether the app—which piggybacked on its bus-tracking GPS system previously marketed to school officials only—would work. But they wondered how fast parents and students would adopt it.

“It has absolutely exceeded expectations,” said Synovia CEO Jon King. “When we launched this, we were heading into uncharted waters. The app has 1.2 million registered users and 300,000 daily users in 3-1/2 years. It’s pretty amazing.”

The company has achieved as much revenue growth in the last four years as it did its first 13, and company officials said Here Comes the Bus has played a major role in that growth.

Revenue has climbed from $14 million in 2014—the year before the app launched—to a projected $29.2 million for 2018. This year, Synovia is aiming to grow revenue to $35 million.

While the company does have municipal and commercial clients, the vast majority of revenue—81 percent—comes from schools.

Synovia, founded in 2001, has 120 employees. It plans to hire up to 12 more in 2019—in sales, support, software development and training. Company officials said they have room to grow at their 12,000-square-foot headquarters off of East 96th Street and North Keystone Avenue.

“We’re in a double-digit growth industry and we feel we have a product that stands out,” King said.

The GPS vehicle-tracking market began to grow significantly more than a decade ago, but it was primarily targeted at over-the-road trucks and other commercial vehicles. Only recently has the technology been expanded to schools, where Synovia officials say they have an advantage by being an early entrant.

“Before, we were primarily B-to-B or B-to-[government],” said Thomas Polan, one of the company’s co-founders and its senior vice president of technology. “With this app, we went from appealing to a small number of school administrators and transportation directors to tens of thousands of students and parents.”

While the app is free, it proved to be a significant marketing tool.

The app’s launch led a number of mainstream news outlets—from Fox News to Parenting Magazine—to feature Synovia and its offerings. That, in turn, led to heightened awareness among parents.

“Parents have become a primary advocacy group for us,” King said. “There isn’t a day that goes by that we don’t get an email from a parent who says they’re going to talk to their local school officials about getting the Here Comes the Bus app.”

When school corporations sign on to buy the hardware and software needed to enact the app, they often subscribe to a wide array of Synovia’s tracking services—which range from recording bus drivers’ hours and pay to monitoring bus-maintenance needs and providing turn-by-turn navigation for drivers, which is a huge advantage for substitute drivers.

Ten of the nation’s 25 biggest school corporations—from Los Angeles to Charlotte, North Carolina—are Synovia clients, as are some of Indiana’s biggest school systems, including Indianapolis Public Schools and Washington and Pike township schools.

Synovia has more than 1,000 customers and is monitoring 115,000 vehicles nationwide. By the end of this year, the company expects to be monitoring up to 150,000 vehicles.

Synovia officials are aiming for 1 million daily users within the next year.

But there were skeptics among the app’s early adopters.

“When I told our bus drivers we were going to have this installed in 2015, they were scared and nervous,” said Mark Anderson, transportation director for the Decatur Township school district.

“I think it was the technology that made them nervous, and maybe they felt like it would allow parents—among others—to look over their shoulders,” Anderson said.

The app tells students and parents exactly when the bus will arrive. Synovia’s hardware and software shows school officials a litany of other data, such as when and where the bus stopped along the route; how long it idled; how fast it traveled; when, where and for how long the stop arm was used; and when the bus doors opened and closed.

“It’s so convenient and it holds everyone accountable,” Anderson said. “If you’re doing your job, it’s great protection for the drivers. It tells parents, ‘We were at your bus stop at this time—and here’s the proof.’ It has made the drivers’ job a lot more efficient. Now all I hear from bus drivers is, ‘How did we get by without this before?’”

Synovia charges $32 per bus per month for the tablets installed on the bus, navigation services, the ability to enact the Here Comes the Bus app, engine diagnostics, basic GPS, and a time-and-attendance monitoring program for drivers.

That costs Decatur Township schools about $2,600 a month—including hardware and software—to monitor 81 buses. Decatur has a five-year contract with Synovia.

“For the service they provide, we didn’t consider that cost-prohibitive,” Anderson said.

Because the app is free, “the student, parents, grandparents and baby-sitters can all download” it, Anderson said. “We also have a number of day cares in our school district that have downloaded it to use for our students who go to their centers.”

School officials are so bullish about the app that they preload it on the iPads they distribute to students. Next year, all K-12 students in the school district will be issued iPads.

“It’s a big deal for us,” Anderson said. “Not only is it more efficient, we have a number of low-income families that can’t afford nice clothes, so it keeps students from waiting at the school bus without a coat.”

Some of the low-income students are given mobile WiFi hot spots so they can access the internet and use the app from home.

Anderson, too, is a parental user. He and his wife both work and must leave the house before their eighth-grade son boards his bus. “Not only does the app help him make it to the bus stop on time without waiting for long periods outside, it signals us when the bus stops at our stop and when it arrives at school,” he said. “That’s a big reassurance for my wife and me.”

Here Comes the Bus is being used by more than 6,200 parents and students in the fast-growing Avon School Corp., which launched the app in 2015.

“The response to this in Avon has been overwhelmingly positive,” said Linda Holtgrave, coordinator in the Avon School Corp. transportation department. “We have so many parents who say they don’t know how they got by without it.”

King said Synovia has “tremendous growth opportunities,” given the more than 500,000 school buses and 14 million government vehicles in service nationwide.

Synovia is rolling out a new version of Here Comes the Bus in 2019 that requires less investment from school districts. Company officials say that should accelerate growth. And to ensure continued growth, King said, Synovia is investing 10 percent of its annual revenue in new technology.

King also said Synovia’s offerings will be useful for a wide array of on- and off-road government vehicles—from snowplows to lawnmowers. Synovia’s system has the ability to indicate when a truck’s snowplow is dropped and in use or when a lawnmower’s blades are turning.

“This isn’t the end of the ride for us,” King said. “It may just be the beginning. We feel there’s a lot of room to grow in the school sector and there’s a great opportunity for us to diversify our customer base. We feel like there’s a $1 billion sales opportunity out there.”•