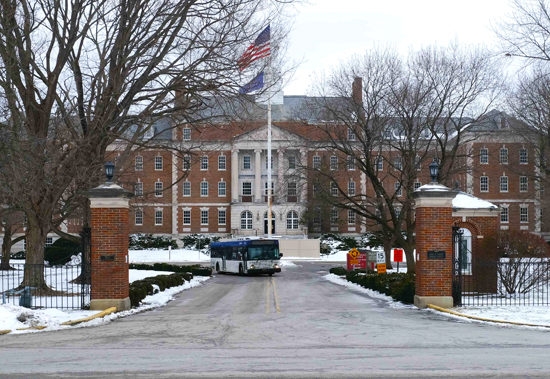 Marian University is interested in taking over the site of a nearby state hospital that will close later this year, with hopes of redeveloping the area as an extension of its campus.

The private Catholic university in recent months initiated conversations with the state about assuming control of part or all of the Larue D. Carter Memorial Hospital campus at 2601 Cold Spring Road, which sits half-a-mile south of the college’s southernmost boundary. The hospital serves patients with persistent and severe mental illnesses.

“[It’s] something we’re looking at for the future,” said Mark Apple, a spokesperson for Marian. “We’re kind of uncertain right now about how we want to use it, … but we do know that as an anchor on the west side, we don’t want to see that property sit empty.”

The university is open to all options that would allow it to redevelop the site, which is owned by the federal government but leased by the state.

Apple said the university has sent out a request for proposals to local developers, with the hopes of gaining a better understanding of potential uses for the 30-acre property. He said some of the leading uses under consideration for the site include mixed-use developments and new classrooms.

Apple said the project would likely include a concerted effort to increase walkability in the area, given the close proximity of Marian and the Larue Carter site.

The conversations about the future of the Larue Carter campus come as the hospital prepares to close its doors after 22 years. The state’s Family and Social Services Administration has embraced a new approach to mental health with the upcoming opening of the Indiana Neuro Diagnostic Institute, a 155-bed mental care facility on the Community Hospital East campus.

Apple said the state has been receptive of Marian's interest in the site, noting that conversations are ongoing but that it's not a done deal.

The process that would be used for giving Marian control of the Larue Carter site isn't entirely clear. The U.S. government owns the land on which the state hospital was built—it was formerly the city’s VA hospital campus—but the buildings themselves are owned by the state of Indiana, with the lease for the land running through 2031.

Indiana Department of Administration Commissioner Lesley Crane said the state is “exploring what the options look like” for use of the property and indicated there’s ongoing dialogue with the VA regarding the matter.

Crane confirmed Marian’s interest in the site, including the prospect of redeveloping the area. She noted several possibilities for Marian's involvement, including having the school assume the lease, drafting a sublease or a selling the land to the school outright.

Crane said “there’s a lot of opportunity” on the west side for redevelopment and that state officials would welcome the chance to partner with the school or other groups on a redevelopment effort.

Marian, for its part, is awaiting proposals for the site. Apple said the university hasn’t yet finalized a possible budget for the effort. He classified the effort as being “in its early stages.”

Apple didn’t indicate whether the school is considering other areas for redevelopment or if its interest is limited to the Larue Carter property.

Marian in recent years has taken steps to extend its campus’ reach, with northward expansion toward a tree line bordering Interstate 65. The campus is about 120 acres overall, and the school has about 3,400 students.