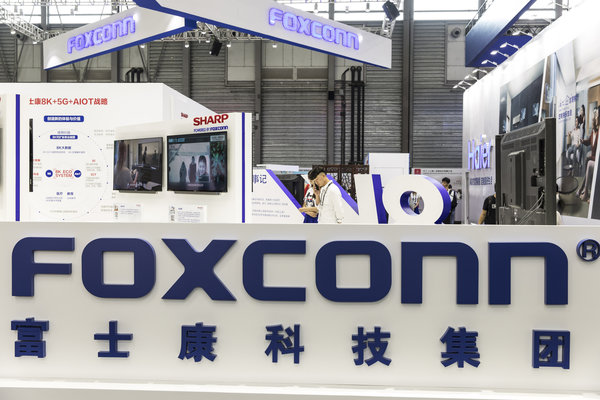 A major jobs deal President Donald Trump has touted with former Wisconsin Gov. Scott Walker now looks uncertain: Foxconn, a prominent supplier for Apple and other electronics-makers, says it's scrapping plans to build a giant new factory in Wisconsin, opting to hire American engineers and researchers instead of a promised fleet of blue-collar workers.

"As we have previously noted, the global market environment that existed when the project was first announced has changed," Foxconn said in a statement Wednesday. "As our plans are driven by those of our customers, this has necessitated the adjustment of plans for all projects, including Wisconsin."

The Taiwanese technology juggernaut initially pledged in 2017 to construct a $10 billion display panel plant and create up to 13,000 jobs in the state's southeastern corner over the next 15 years. The positions would pay an average annual wage of $53,000, the firm said—a solid salary in the manufacturing realm.

In exchange, Wisconsin agreed to give Foxconn at least $3 billion in state tax credits and breaks, according to the Wisconsin Economic Development Corporation, a public-private agency that helped negotiate the package. The deal drew criticism after it emerged that Wisconsin would not make money for 25 years.

Foxconn said Wednesday that it still aims to create 13,000 jobs in the state but did not respond to questions about the nature of the positions, when they would arrive and what precisely inspired the shift.

"In Wisconsin, we're not building a factory," Louis Woo, special assistant to Foxconn CEO Terry Gou, told Reuters. "You can't use a factory to view our Wisconsin investment."

Under the contract, Wisconsin can cancel some payouts if Foxconn does not stick to its word.

State officials on Wednesday said Foxconn will not qualify for tax incentives until the company meets its job creation and facility investment targets.

"WEDC's performance-based contract with Foxconn provides the company the flexibility to make these business decisions, and at the same time, protects Wisconsin's taxpayers," said Kelly Lietz, vice president of marketing at the Wisconsin Economic Development Corporation in a statement.

Lietz added: "Foxconn's long-term success both globally and within Wisconsin is centered around the alignment of its business model with ever-changing global economic conditions, including evolving customer demands."

Rep. Mark Pocan, D-Wis., who asked the U.S. Government Accountability Office in November to investigate the Foxconn deal and other enormous state subsidy packages, said Wisconsin has already poured cash into new roads, campus construction and paying families who lived on the tentative factory site to move. He declined to name a figure.

"These companies play communities against each other to get the very best deal at the expense of the taxpayer, and they don't live up to the deal they promised," Pocan said.

Trump celebrated the deal in the East Room of the White House in 2017 and attended a groundbreaking ceremony last summer in Racine County.

"I would see Terry, and I would say, 'Terry, you have to give us one of these massive places you do great work with,' " he said two years ago in front of news cameras, adding that he told the company head: "The American worker will not let you down."

Woo, the Foxconn official, told reporters the firm wasn't sure how to proceed in Wisconsin, citing the high cost of assembling TV screens in the United States. Labor costs are steep, he told Reuters in the Wednesday report.

The comments reflect a sharp reversal in a plan Walker and state officials had said would transform Wisconsin into a technology hub like Silicon Valley.

Foxconn didn't hire enough workers in 2018 to claim the sweeteners, closing the year with 178 full-time employees in the state, according to a letter the company sent state officials. That's 82 positions shy of the minimum requirement.

It's hard to say how Foxconn's expansion in Wisconsin will play out, said Tim Bartik, a senior economist at the W.E. Upjohn Institute for Employment Research who has studied the deal.

What was billed as a blue-collar victory, he said, seems to be turning into more of a research-focused operation."

This big change seems so weird – it's puzzling," Bartik said. "You're investing over a long-term period. Relative wages will change, and the technology will change, but all of that is taken into account in making the initial investment decision."

"The state of Wisconsin is investing in a once-in-a-lifetime economic development opportunity that will be transformational as the state will become home to the only LCD manufacturing facility outside of Asia," Mark Maley, spokesman for the Wisconsin Economic Development Corporation, told The Washington Post in a November email. (Maley did not immediately respond to requests for comment Wednesday.)

Foxconn has a history of retracting its hiring announcements.

The company grabbed headlines in 2013 when it unveiled plans to invest $30 million and generate 300 jobs at a new high-tech factory in central Pennsylvania. The state's governor applauded the news, and economists predicted Foxconn would lead a local manufacturing revival.

But after the spotlight faded, Foxconn dropped its plans in the state.

Trump and Walker's deal with the company also sparked criticism.

Walker lost his race in November to Democrat Tony Evers, who has slammed the Foxconn deal a as a "Hail Mary pass on the part of the governor."

The reaction among residents was mixed. One Marquette University Law School poll found 46 percent of registered voters said they thought Wisconsin was overpaying Foxconn, while 40 percent said the plant will generate as much value as the state's investment.

Wisconsin's offer of economic sweeteners to Foxconn was unprecedented in scale, analysts say. The bundle of financial incentives was larger than what New York, Virginia and Tennessee collectively pledged to Amazon to win its new offices, a Washington Post comparison of the two development projects showed.